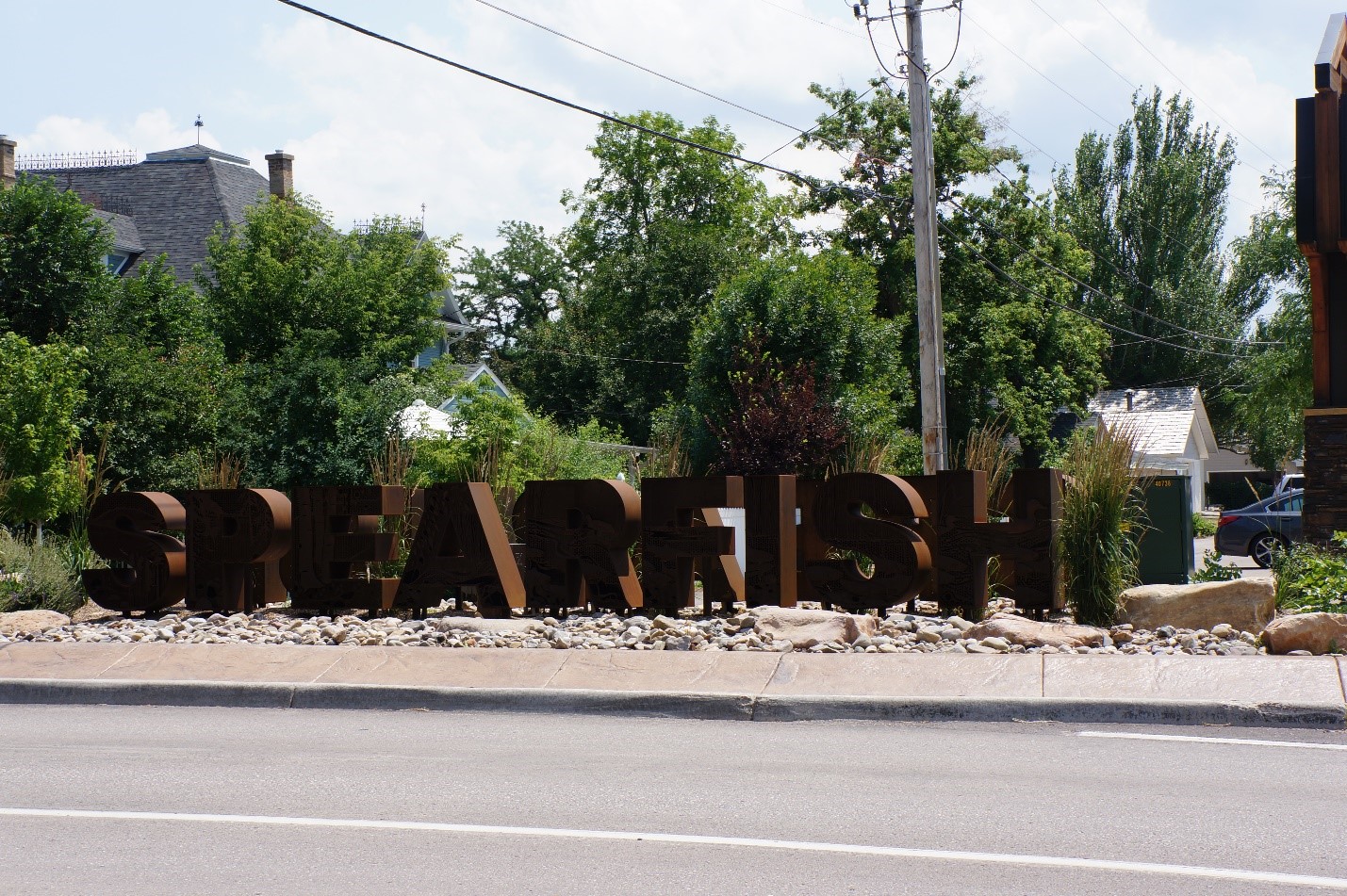 Our afternoon in Spearfish began with a great, albeit toasty, tour of the new East Jackson Boulevard work recently completed by Tallgrass Landscape Architecture. This project was a unique collaboration between the design team, the City of Spearfish, and other significant stakeholders to redesign one of the area’s most travelled routes. The design team solicited considerable feedback from the public during the master planning process, which allowed the team to identify a number of strategic opportunities. The median was carefully designed to highlight various moments and experiences that Spearfish has to offer. The design team used many design features, but some more recognizable ones include custom built steel “SPEARFISH” signage, strategically placed boulders that mimic the geology of Spearfish Canyon, and plantings that are encouraged to grow and create a verdant space. The roadway itself was slightly narrowed to slow traffic coming into town while leaving enough space for bicycle traffic on the sides.

After a quick break and a drive across town, the Design in the Hills crew met up at the Creekside Development on the north side of Spearfish. We were given a great tour of the Farmhouse Bistro & Bar designed by JLG Architects. The area’s agrarian past is reflected in the structure’s form with a white main building mass, and a lighter structure adjacent to it. The main restaurant has two stories of dining with a variety of seating options and views out to Spearfish Creek and Crow Peak. The Alaskan white cedar “corn crib” structure creates a unique dining experience where one feels neither inside nor outside but together as one.

After we were given a great overview of the Creekside Development by Jason Roberdeau of Williams and Associates. Many unique aspects of the development were discussed such as shared parking agreements to minimize parking lot size, requiring a variety of businesses and future residential to promote mixed use development, and a discussion about the building’s impact on the site was also shared. The design team elected to site the buildings very delicately by using structural slab foundations in lieu of traditional footings and stem walls, which require a tremendous amount of excavation and earthwork. The team wanted to minimize disturbance on the site and nearby creek, so the shallow structural slab system is heavily utilized on these sites. Concerns with the flood plain and floodway were also shared.

Lastly, we were treated again to a wonderful mixer and sponsor showcase. Thank you to Hebron Brick Co. and Creekside Bean & Vine for hosting our mixer this year with a terrific selection of appetizers and drinks. Thank you as well to all of the vendors who set up booths to showcase their new products while we relaxed in the shade. It was an excellent way to conclude our afternoon session of Design in the Hills. What an experience it was to Reconnect with old friends and meet new ones after not seeing one another in almost two years! Leaving Spearfish to drive back to Rapid City that afternoon was a bit bittersweet as it was truly a great day and one of the reasons I enjoy coming back to AIA SD Design in the Hills each year!

Cover Image: Custom built steel “SPEARFISH” signage on one of the medians along East Jackson Boulevard in Spearfish, SD.