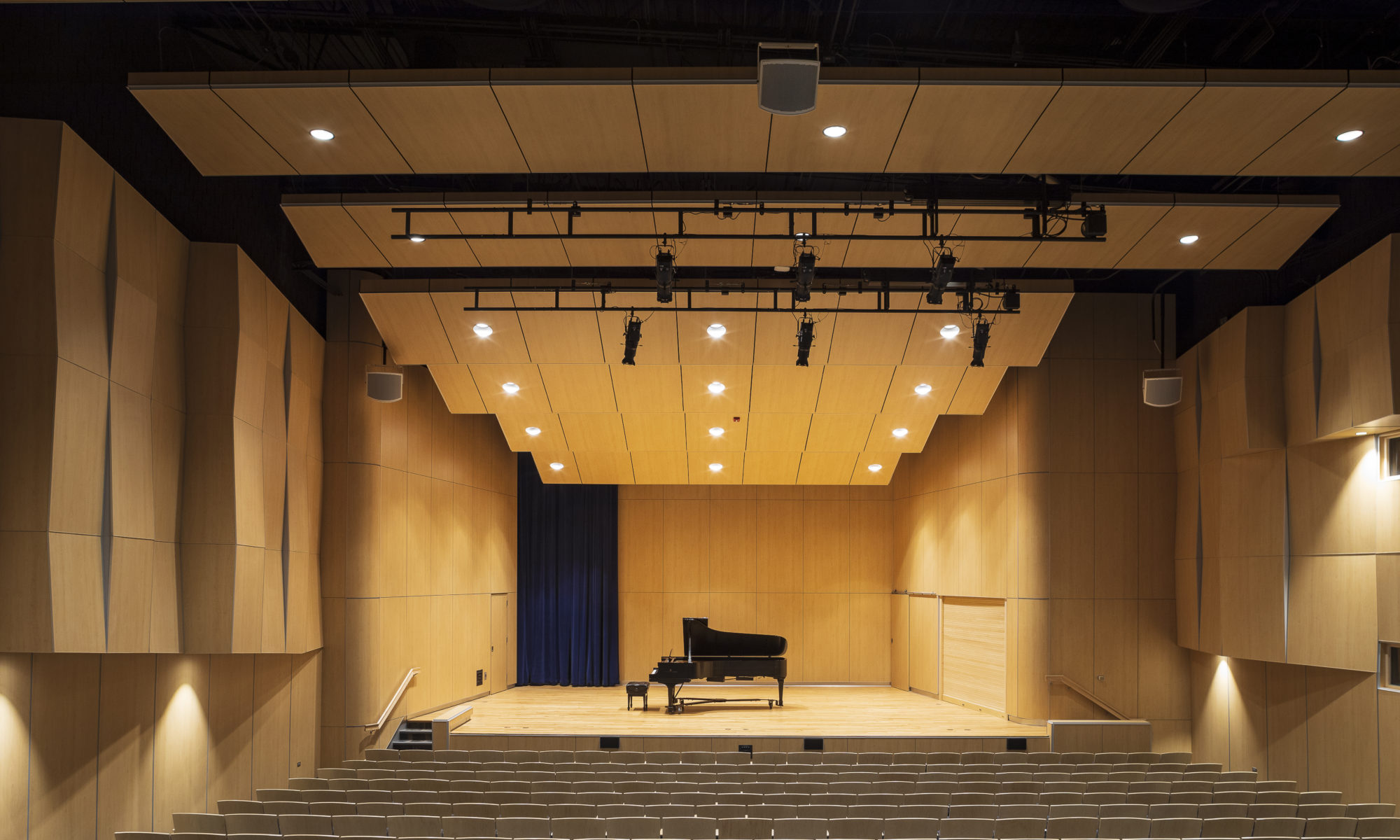 Augustana University students had performed in the same Kresge Recital Hall for nearly 50 years. Nestled deep within the interior of a large Humanites and Arts building, its color palette evoked the 1970s, and the acoustics scheme was abstract and minimalist.

Augustana came to TSP to help them formulate a list of improvements for the spaces, as well as surrounding rehearsal and classroom spaces within the building. For the recital hall, Augustana desired a “showpiece” with a warm, Norwegian aesthetic that reflected the university’s roots.

Functional elements addressed included accessibility and seating. After test-fitting various seating schemes that mimicked the existing layout in which a center bank of seats was separated with aisles that cut-off groupings of periphery seats, it was discovered that a continental seating format would actually make more seating possible while also increasing the overall width of seats. This also made for more straightforward access from the entries at the hall’s rear.

Designed in a pre-ADA era, an odd sloping to the floor further hampered original access. Original drawings for the building literally called out a “warped surface” along the main access aisles. The new design flattened out this area and extended it one row toward the stage to accommodate accessible seating options.

Acoustically, the original stage was too small, so the reflective membrane above was extended into the audience. This led to a consistent ceiling vocabulary of veneer-clad clouds with details that echoed the wall paneling. Along the side walls, existing geometries of the stage were emphasized and then subtly diffused with slight in-field modifications.

The reveals within the paneling not only stem from practicality for installation, they also are a nod to a consistent aesthetic across campus, including the very building the recital hall is situated. The reveal detailing at the stage features refined and elegant kerfs, where portions of the edges of the panel are exposed and considered, yet at the audience, the reveals are wider, broken apart, and covered, echoing the function of the acoustics and other geometries within that spectator space (diffusing and spreading outward).

The final project resulted in a spectacular transformation of an outdated space that reinvigorates Augustana’s already fantastic music program.

As we often do at TSP, we “designed it like we own it” and took this project personally – probably more so than many other projects we work on. As the lead on this project (designer, architect, project manager), I took this project much more personally than any other I’ve worked on. Not only was a spectacular result important to me as an alumnus of Augustana, but from 3rd grade on I found myself in the recital hall once a year for an annual piano recital. This recital hall represents one of the major influences on my life; music and piano performance, as well as symbolizing one of the most influential people in my life – my childhood piano teacher: the late, great Suzette Brazones. To honor her legacy, achieving a spectacular result wasn’t just a desire (as it is with every project), it was the only option on this one (I’m not crying, you’re crying).

Luckily, as we moved into the second portion of the Humanities building’s renovation, faculty said “Just do what you did on the Recital Hall, it’ll turn out great.”

Of course, the success of the project wouldn’t have been possible without a great design team, including the engineers at TSP, Schuler Schook for their theatrical rigging and lighting expertise, KR Acoustics for their acoustic analysis and recommendations, Peterson AV for design of the audio-visual schematics, Henry Carlson for skillful execution of the work, Imagery Photography for photographing the result, and of course a great client like Augustana that believed that this space could be transformed, and trusted one of their own alumni with developing that vision.