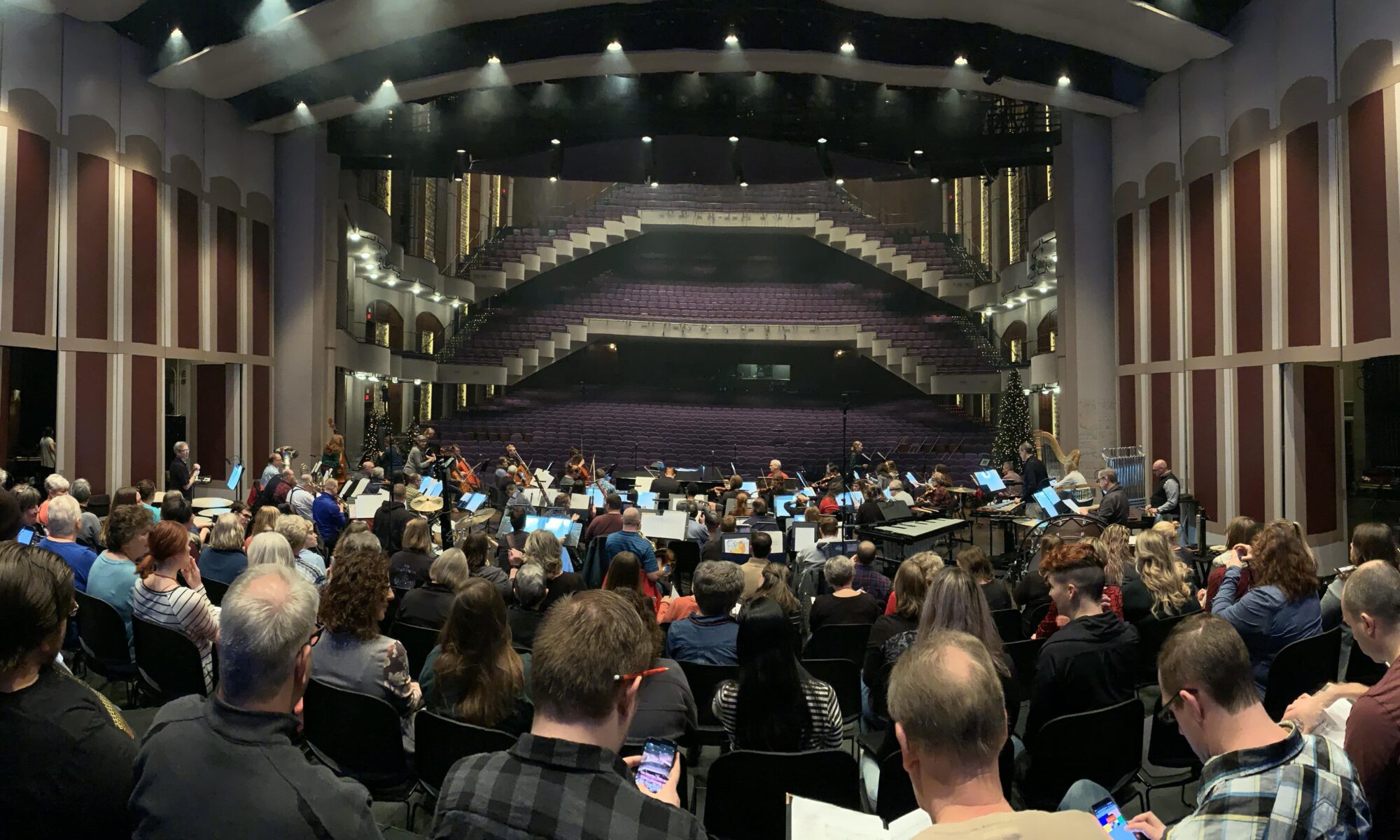 On Monday’s post, we covered some basic visual aspects of music performance spaces design. However, the key purpose of these spaces is for hearing, and for that an understanding of architectural acoustics is warranted. When it comes to acoustics, we are not talking about the basic assumption that most architects are trying to achieve, which is noise reduction or sound absorption. That would be antithetical to a performance space, though absorption certainly is part of the strategy.

As noted in the last post, there are likely as many visual strategies to integrate acoustics as there are individual designers and personalities out there, yet most spaces have a common strategy for spreading the sound appropriately throughout a space. Shared characteristics of most types of acoustic strategies typically include sufficient early sound reflections and even distribution of sound throughout the hall. Sound reflections and diffusion are provided by all the ‘unique’ treatments of cladding one often finds in a performance space as one moves closer to the stage – funky or angled wall panels, convex ceiling clouds, etc. It’s important these have proper density and mass so that they don’t absorb low frequencies and instead reflect as many sound frequencies as possible out into the audience.

Diffusion is the key further back in the house (audience) to help spread the sound around and maintain a certain intensity of sound while simultaneously destroying any sense of confusing echo. At a very basic level, you can look at diffusion as micro-reflections – sound bouncing in infinite directions by reflecting off of many surfaces at once or off of concave surfaces. Intuitively, patterned deep slats are often beneficial in diffusion (often derived off of trigonometric formulas), as are multi-faceted or convex surfaces in the geometries of the space or in applied paneling to walls and ceilings. That all being said, reflection and diffusion can only work well if a space has proper volume and is appropriately proportioned. Any reflection strategy is moot if you only have a 9’-0” ceiling in a space.

Reverberation (usually perceived as a sound delay) is the main characteristic that will vary an acoustic strategy, and it is generally based around performance type. Consideration revolves around how much overlap/blend you want for the sound energy – we’re talking microseconds of reverberating diffused sound here, not a perceived long echo of reflected sound. Generally, echoes are to be avoided and are actually evidence of a poorly designed space (see “Echo=Bad” section below). Regarding reverberation, one can intuitively understand that anything with lyrics (or spoken word like theatre) would want “less” reverberation so that diction comes across more clearly and doesn’t overlap the sounds or words previously spoken. This must be balanced with a desire for good blending of sound when paired with music, as in choral performances. An even longer reverb may be desired for purely instrumental settings, and the reverb associated with a “cathedral” sound as in the Part 1 opening narrative of this post can be even longer, exceeding 2 seconds for most frequencies (but allowing for some great overtone creation and resonances). Different materials have different frequencies of vibration, and while a general practice architect can attempt some reasonable intuitive approaches, these days the calculations are best dialed in by an acoustic consultant (trust me, it’s more math than I’ve done since Calculus II in college).

Avoiding long or other anomaly type echoes (flutter, slapback, etc.) is paramount in performance space design, and acoustic schemes should avoid these not just for the listening comfort of the audience but also for the performer. These echoes can cause hearing confusion – think back to the time you perhaps were near a national anthem singer at an arena stadium and could hear them sing at the source, but then were treated to the lovely electronic delay coming out of loudspeakers perhaps 50 yards away – an annoying echo to say the least (and just imagine the difficulty for the performer)! This can happen in a fully analog setting too, and these echoes are often caused not by electronic delays and speaker distancing, but by parallel reflective surfaces or flat/concave surfaces directly facing the performer or source of sound.

Obviously, square or rectilinear building forms are pretty efficient and cost effective for construction, so parallel walls are often the norm and need to be treated. This can be done by structuring interior partitions to have a slight (even 5 degree) angle to them, or when angles just cannot work for the space, by properly diffusing and absorbing sound where the echoes are likely to occur. This accounts for why many performance spaces utilize sound absorbing panels along the rear or house and in the back corners – the sound frequencies are absorbed and cannot create the bothersome echoes. Similarly, diffusion does this without losing as much of the sound intensity by scattering (in lieu of absorbing) the soundwaves different directions – rather than all the same direction as would be found in an echo producing configuration.

Classically trained musicians tend to prefer an analog acoustic setting, but not all spaces are created equal, and such a preference would severely limit a performers venue options, as well as limit the types of performances that can take place in a space. Outside of the straightforward needs for amplification of quieter instruments or voices (i.e. a jazz singer with a brassy jazz band), larger spaces can require a bit of “help” to send sound to distant parts of the audience. A digital audio amplification system needs to be carefully coordinated with the acoustic consultant so that sound reflections can be properly timed for both the analog and digitally amplified settings, avoiding the previously noted issues of echo, and of course the “stadium singer” effect referenced earlier.

We tend to be pretty pragmatic folk here in the upper Midwest. Often times the “performance” spaces we design won’t be used for just a single type of performance, let alone a single type of music or theatre. Thus, flexibility of space is key.

Size of stage is a major consideration. A large high-school proscenium stage meant for theatrical productions may not be appropriate for small ensemble or even the school band or choir. Some sort of treatment is needed to help project sound outward toward the audience, generally achieved with some form of movable sound shell. I recommend investing in one attached to rigging above and where only the vertical side panels are on wheels. The manila colored cantilevered canopy type[i] I recall from my elementary school days still frighten me, though I’ve never actually witnessed the canopy falling down and hitting anyone on the head.

Outside of precision automated diffusers that can adjust and move to change the acoustic setting of a space (who has the budget for that?), curtains or other portable absorptive materials are often the best tactic in making for a flexible acoustic throughout the space in general. Retractable hide-away curtains can be pulled out to provide more absorption as needed (say for a large brassy ensemble), or tucked away to allow for a more live acoustic (such as is desired in small ensemble or solo performance, or for spoken word). High end spaces use this tactic well. When performances start back up again and you find yourself in the Mary W Sommervold Hall at the Washington Pavilion in Sioux Falls, pay attention to how much of the stone and wood paneling on the side walls is “exposed.” It can vary from performance type to performance type, depending on the acoustic desired.

Rehearsal spaces are often quite different than a performance space like an auditorium or recital hall. For one, there is generally no opening to a large area of seating. Oftentimes there will simply be a solid wall facing musicians that only acts as a giant reflector. To achieve an acoustic similar to what the musicians may be facing in performance, it is recommended to provide absorption on this wall, imitating a “stage opening” where the sound just travels out into the audience (no feedback). That being said, the rest of the space should be designed to provide the proper feedback one might find in the acoustic shell of the stage, so musicians can still hear one another (and anomalous echoes can be avoided).

There’s a lot of “fluidity” in music rehearsals. Unfortunately, that’s not describing a state of mind or workflow, that is literal. Singers with “spitting” diction, instrument spit valves being emptied onto floors, warm breathing bodies crowded close to one another, often standing for extending periods of time – music rehearsal is a close-knit business. Especially in choral settings, you need to be comfortable near other people. Proximity and “fluids” have obviously been the paramount reason why performing arts have all but ceased during COVID, but even in non-pandemic times, proper ventilation of a space is important. Rehearsal spaces should have much more fresh air being provided to them than an office or even a traditional classroom space. This is challenging of course, as these spaces are often more voluminous, requiring much more air supply to increase the air exchange rates.

In recent years, research has been done on the effect of rehearsal noise on occupational health and safety for conductors/instructors and musicians, in regards to guidelines that OSHA sets forth for exposure. It has been found that amplified music rehearsals do often exceed OSHA thresholds (i.e. rock bands), but these thresholds can also be exceeded by larger full symphonic, brass, or jazz band settings with heavy brass instrumentation, especially in rehearsal spaces that don’t have proper acoustic performance. It is important that rehearsal spaces be designed to ensure that sound levels do not become too intense, while balancing the ability to create a live sound and the need for musicians to hear one another, safely.

In summary, performance venues are unique architectural spaces with unique considerations that must balance the needs of the performers with the needs of the spectators. Obvious from the length of this series (congratulations if you’ve made it through both), there is a multitude of information that can inform how these spaces get configured, and this is only the tip of the iceberg. Ultimately however, when the visual components of the space harmonize with the acoustics of a space, masterpieces of design can be achieved that allow for amazing shared experiences to be encountered, by all users of the venue. Here’s hoping we can all safely gather together again to share these experiences sooner rather than later.

Chase Kramer is an architect and designer at TSP. He has a strong passion for all the arts, serving on the Sioux Falls Arts Council Board, chairing the Washington Pavilion Visual Arts Center Board, singing with the South Dakota Symphony Chorus, and has been known to dabble in some theatrics from time to time. He is personally and professionally fulfilled by advocating for truth and beauty in all that he does. He lives in Sioux Falls with his wife and 3 children.