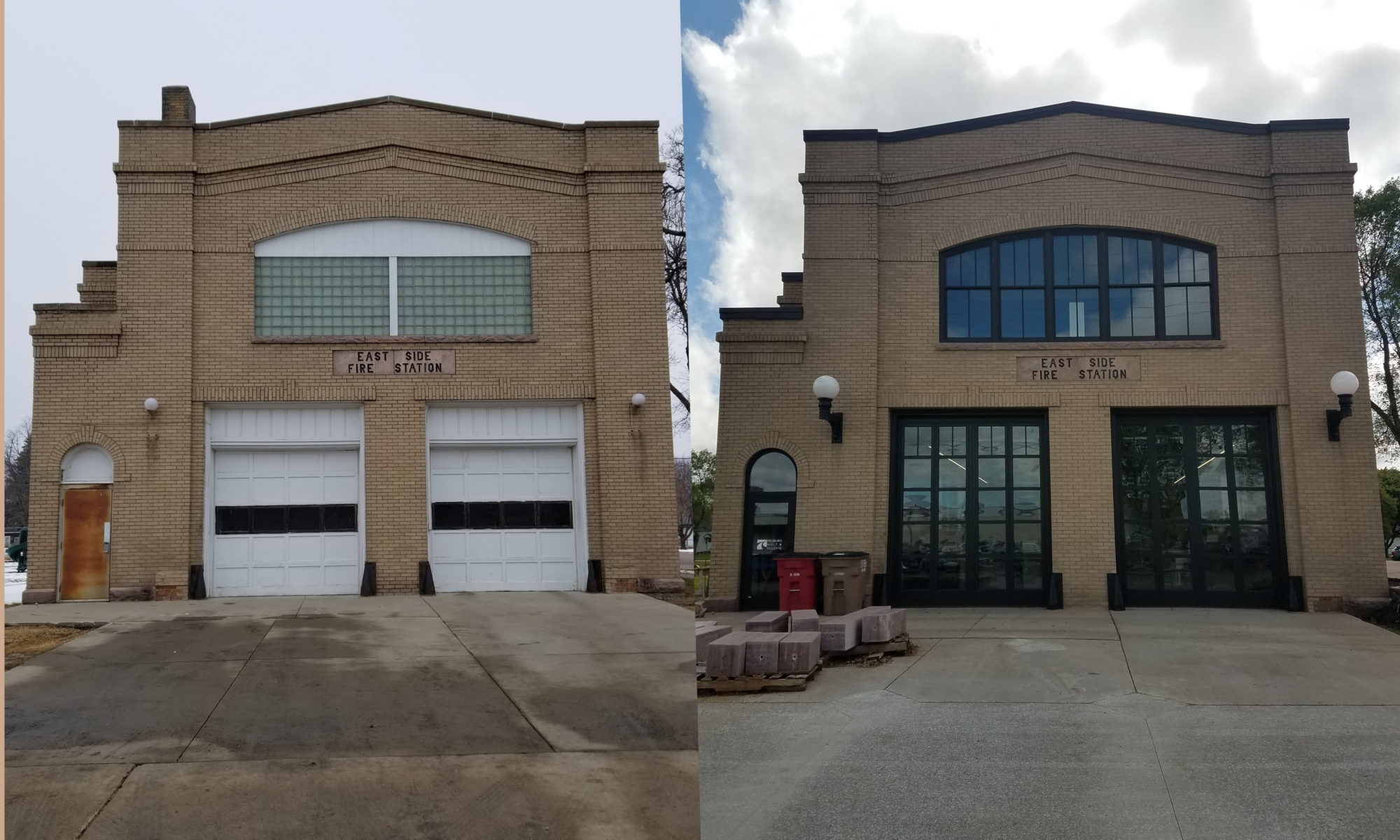 Stone Group Architects recently got the opportunity to restore and remodel the East Side Fire Station to use as our office. Like any historical remodel, it was not without its problems, but the rewards just keep coming.

Occupying the southwest corner of Heritage Park near downtown Sioux Falls, the fire station was constructed in 1916 and the library was added onto the east side shortly after. In the 1960’s, the building was re-purposed to house the Sioux Falls Parks and Recreation department but had been used exclusively for storage from 2006 until it went up for sale in 2017.

Todd Stone, founder and co-owner of Stone Group Architects, had his eye on the fire station for years and (along with some investors) jumped at the opportunity to purchase the place. Located only 4 blocks from our old office, no one expected a building with this history to be in pristine condition, but it was in much worse shape than most people realized. The north wall and the roof of the library needed to be rebuilt, the entire building needed to be tuckpointed and the interior was a gut job, except for the historical components that we needed and wanted to keep. Usually these are not especially formidable tasks but combining them with the goal of getting the building on the Historic Register and qualifying for the tax credits, which make a project like this feasible, added time and difficulty to the project.

Many of the historical aspects of the library had been lost with the 1960’s remodel, so the main concern fell on the garage space and fire fighters’ quarters above. We were able to maintain the old lockers and historical detailing throughout the hallway and stairs and after a lengthy process of convincing the national historic preservation office that windows that are falling apart are not worth keeping, we worked diligently to provide replicates of the originals. All our time and effort paid off; not only do we have a new office, but we will soon be listed on the National Register of Historic Places and in May we received the Sioux Falls Mayor’s Award for Historic Preservation for 2019.

As a worker in this space, I’ll be honest with you: It’s fantastic. We had outgrown our previous office about a year before we were able to move, so coming into this building with so much natural light and space has improved both employee morale and productivity. We love our NanaWall doors that we can open on nice days. We also have a fire pole and hope that we will soon have a dalmatian (statue).

Throughout the project many former fire fighters contacted us about the building, sharing stories and asking questions. Some mentioned a mural they knew was painted somewhere in the building. We were thrilled when we found it, but devastated that despite our best efforts, it couldn’t be saved. Luckily, we were able to document it and we are still looking at the possibility of having an artist replicate it to hang in the current space.  We also provided a full size print to the Fire Department for them to hang in their museum.

Understanding that there are many in the community who have been looking forward to the revitalization of this building (we see you drive by taking pictures), we are having an open house coinciding with our ribbon cutting. Please join us for drinks and appetizers on Thursday, June 27th from 4-7 PM. Let KimK@stonegrouparch.com know you are coming so we have enough food. Of course, if you worked in the building as a former firefighter, please stop by whenever you’d like, we’d be honored to show you around.

Dorisa Nelson, Assoc. AIA is an Architectural Associate at Stone Group Architects. She received her M.Arch from North Dakota State University where she also studied Anthropology and Environmental Design. She lives in Brandon with her husband, son and daughter.