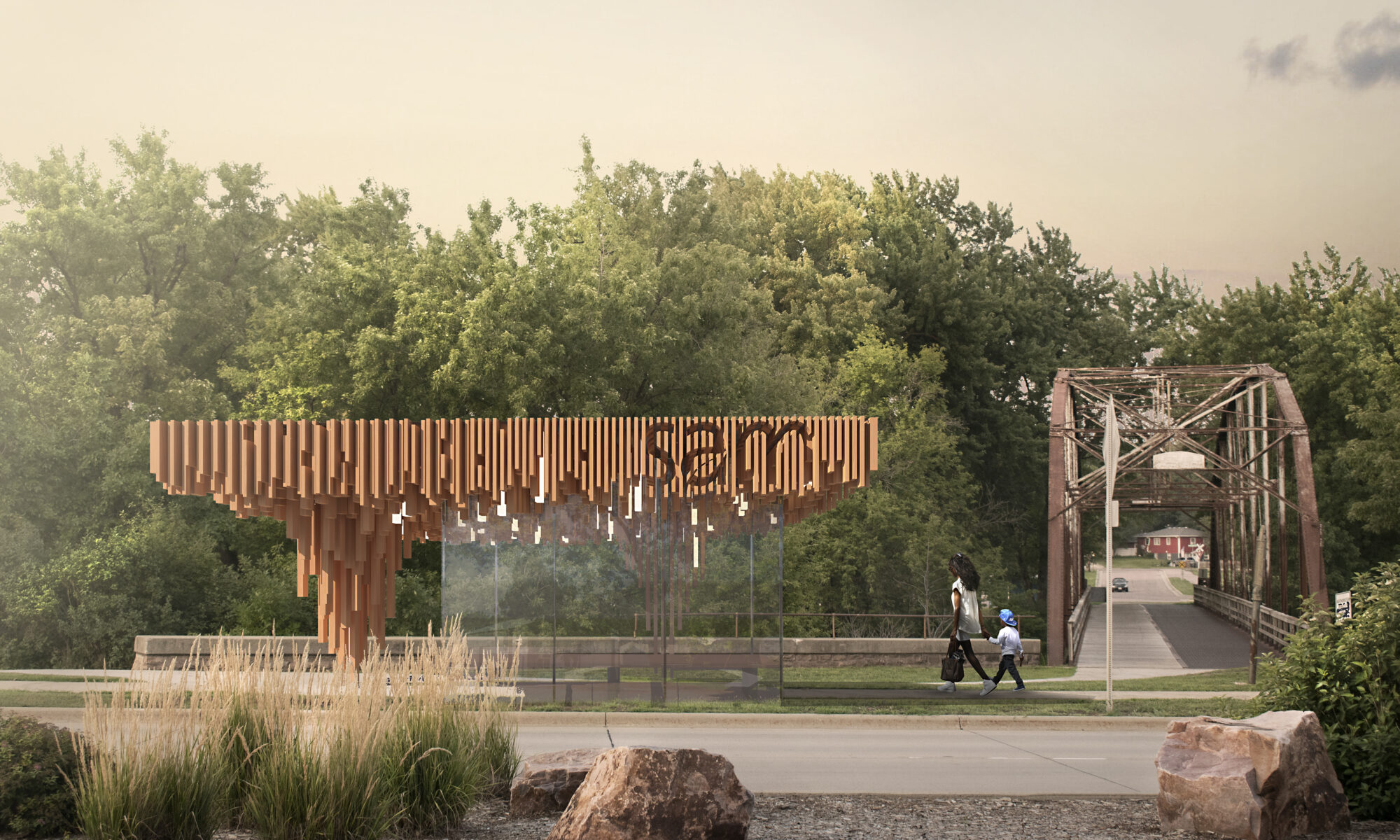 This summer architects, artists, designers, students, and community members participated in the Sioux Falls Design Center’s GO DESIGN bus stop and shelter design competition. The competition encouraged visions of what sustainable, functional, and creative bus shelters and stops could look like for the Sioux Falls community. As part of the larger GOING METRO project, it served as phase 3 in a series of events hoping to facilitate creative conversations about transportation as the City of Sioux Falls seeks to innovate its transit system.

This post is the third in a series, featuring the submissions to the GO METRO competition.

The River Boulevard Greenway bus stop was designed by the Sioux Falls JLG Architects office during their monthly Pancakes and Pinups (P&P) design charette.  During P&P a group of designers share their latest projects, invite in members of the community and solve design problems together.  When the Go Metro project crossed our desks we knew it was the perfect opportunity for the group to pitch a design inspired by the unique local landscape of Sioux Falls.

The design is informed from a hike in the nearby State Parks.  When walking down the trails of Good Earth State Park at Blood Run, as you near the river, broad, reaching tree canopies envelope the trail.  Wider than they are tall, Bur Oak tree canopies create a unique experience with pockets of brilliant light and scattered views of the sky dancing above.  While not uncommon in the midwest, the Sioux Falls area has a prominent showing of the species and is a hallmark of the trail experience.

After finding inspiration in the State Parks, selecting a site that supported the big idea and bridged the gap between nature and transportation was critical.  Analyzing the bus route map, a location along Route #9 revealed itself as an underutilized stop at the edge of downtown and the River Boulevard Greenway.  Nestled at the foot of the Cherry Rock Park ironwork bridge and surrounded by Bur Oak trees, the stop location had a natural material palette that could compliment a design inspired by the proud trees.  The current stop location also only boasts a bus stop sign in one of the most active areas of the greenway.

Our project goals were to create a unique experience that mirrored hiking beneath the trees of the local state parks and provide clean and safe shelter that was well let, and inspiring for bus riders and park visitors alike.  A simple grid of square extrusions pushed and pulled to mimic the canopy of the tree gave the bus stop its form; starting with two large ‘trunks’ anchored sturdily to the earth and bridging across the bike trail give way to an airy canopy above with pendant light fixtures intended to mimic the piercing sunlight through a tree canopy.  A simple material palette of thermally modified oak timbers, glass and light allow the form to shine through.

The final result is something that we hope is not only a critical and functional piece of architecture for the Sioux Area Metro transit system but also awe inspiring and beautiful to compliment the neighborhood.