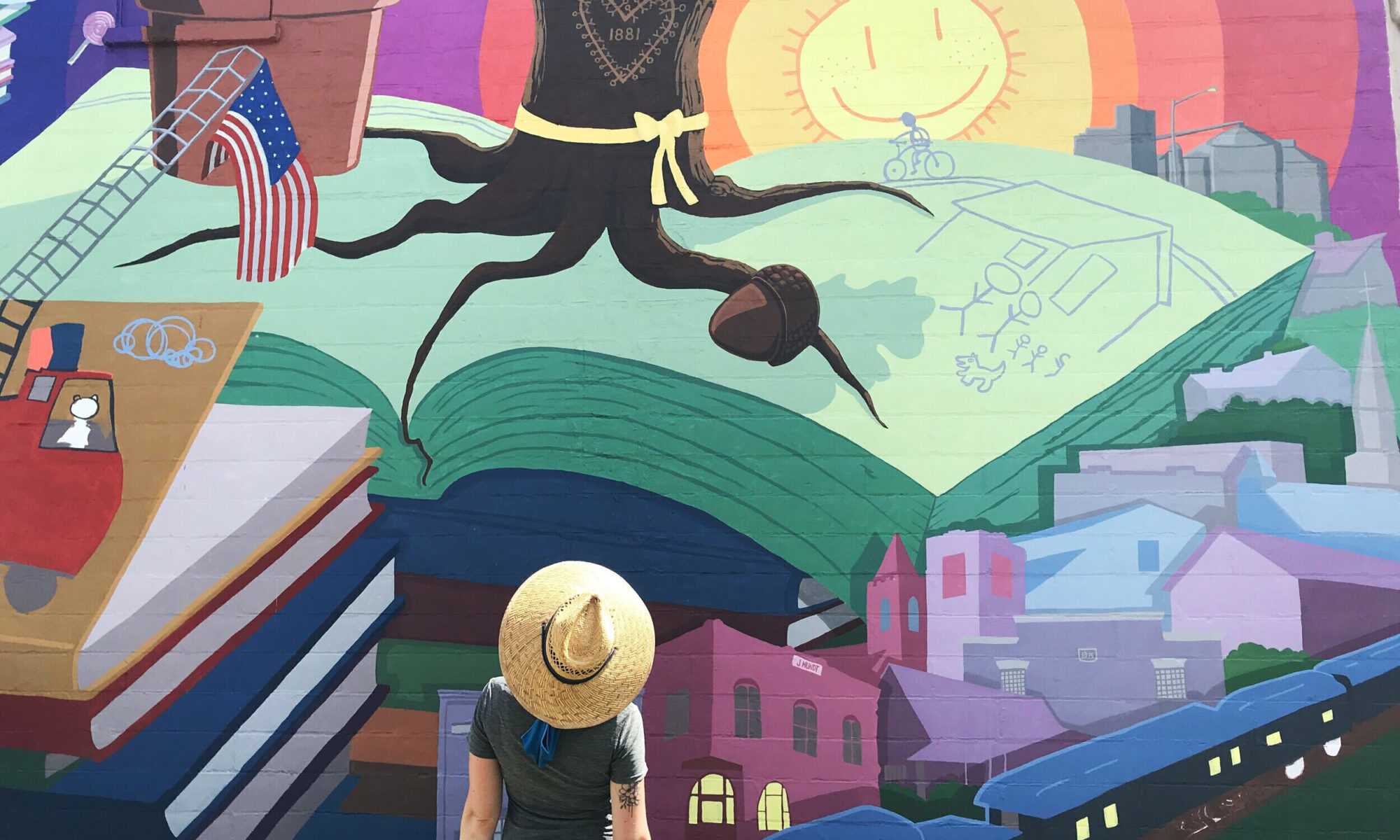 Murals. It seems that in  the last decade we’ve started seeing more and more of them pop up all over the State. Down alleyways in big cities, on main streets in the smallest towns, murals have taken center stage in the world of public art. Maybe because it is so exciting to take a blank wall, lack-luster, deserving more and splash a mixture of creativity together with some paint to make a special place where people will take note.  Many times, these creations standalone beautiful yet secretive. How did it get there? Who painted them and why? Well to answer that you would have to talk with the mural artists, someone like Amber Hansen.

Amber Hansen is a filmmaker, muralist, visual artist and musician who creates socially engaged and community-based artwork throughout the Midwest. Hansen’s work is a dialogue between her formal education and her rural upbringing. She promotes creative engagement for all ages while raising questions about the ethics of animal welfare and our relationship with food.

Hansen is the co-director & co-editor of the feature documentary Called to Walls. She is an Assistant Professor at the University of South Dakota where she teaches painting, and is the President of the Board of the Community Built Association.

We sat down with Amber to learn more about what makes her tick and some perspective on her process.

I began painting murals in high school and learn about drawing, painting and printmaking at the University of South Dakota & The University of Kansas. After graduating, I worked as assistant a muralist to David Loewenstein for 4 years, creating community-based murals. During that time I was also joined by Nicholas Ward and together we decided to document our process. In 2016, we published a documentary film titled, Called to Walls which follows the work of Dave Loewenstein as he creates community-based murals in rural communities and smaller urban areas.

I am inspired by the work of Judy Bacca, Lily Yeh, K.T.Walsh, Alrene Goldbard, Lucy Lippard and many more. Perhaps however, I have been the most influenced and have learned the most from people and communities I have had the opportunity to work with. Books that have been helpful resource are listed below.

A Restless Art: How Participation Won, and why it Matters, by François Matarasso, 2019.

The Culture of Possibility by Arlene Goldbard, 2013.

3.     What is your process for creating community mural?

I work with communities, inviting people to gather together to tell stories, write poetry and draw in order to capture what they care about most in their communities. The next objective is to create an image that reflects the experience of the people who have gathered at the table, to make something which will impact the visual landscape of that place.

The goal of the meetings, are not to create a brand for the community, but to dive into the unique and novel features of that place and to begin the process of surfacing untold or lesser known stories. This is not something that can be fully accomplished in one meeting, one mural, or many murals, but is a practice that should be repeated many times and should manifest in many different types of imagery and forms.

I believe it is important that public spaces are filled with images and stories that reflect the people who live there. In addition, it is equally important to work together to unearth and amplify the stories that are missing. The act of coming together to share stories and ideas about what it means to be a part of a place is important to the fabric of the community and can be an empowering act. Through participating in the creation of the mural, I am hopeful that more people will feel a sense of  belonging and will be inspired to imagine and shape the world that they want to live in.

4.     Out of all of the projects you’ve worked on which has been your favorite and why?

I could not say that I have any one project that would be my favorite. Each community that I have worked with as a plethora of interesting people, histories and stories to share. There is never  a lack of content or people capable of transmitting and sharing that information.

Because the process of coming together to imagine and create imagery that represent a place is so rare, there often is an urgency that falls on the shoulders of one mural. An urgency to tell every story that has been brought to the table and not to leave anything out. Part of this is due to a lack of people trained in the process of leading project like this, in addition to a lack of funding to support artists and communities in make new work.

5.     In the past how have you found the projects you’ve worked on? and any future projects you are especially excited about?

Besides the projects initiated in the place where I live, the communities I have work with have invited me to create with them.

They can email me at amber.hansen@usd.edu

5 Replies to “Murals and Placemaking”