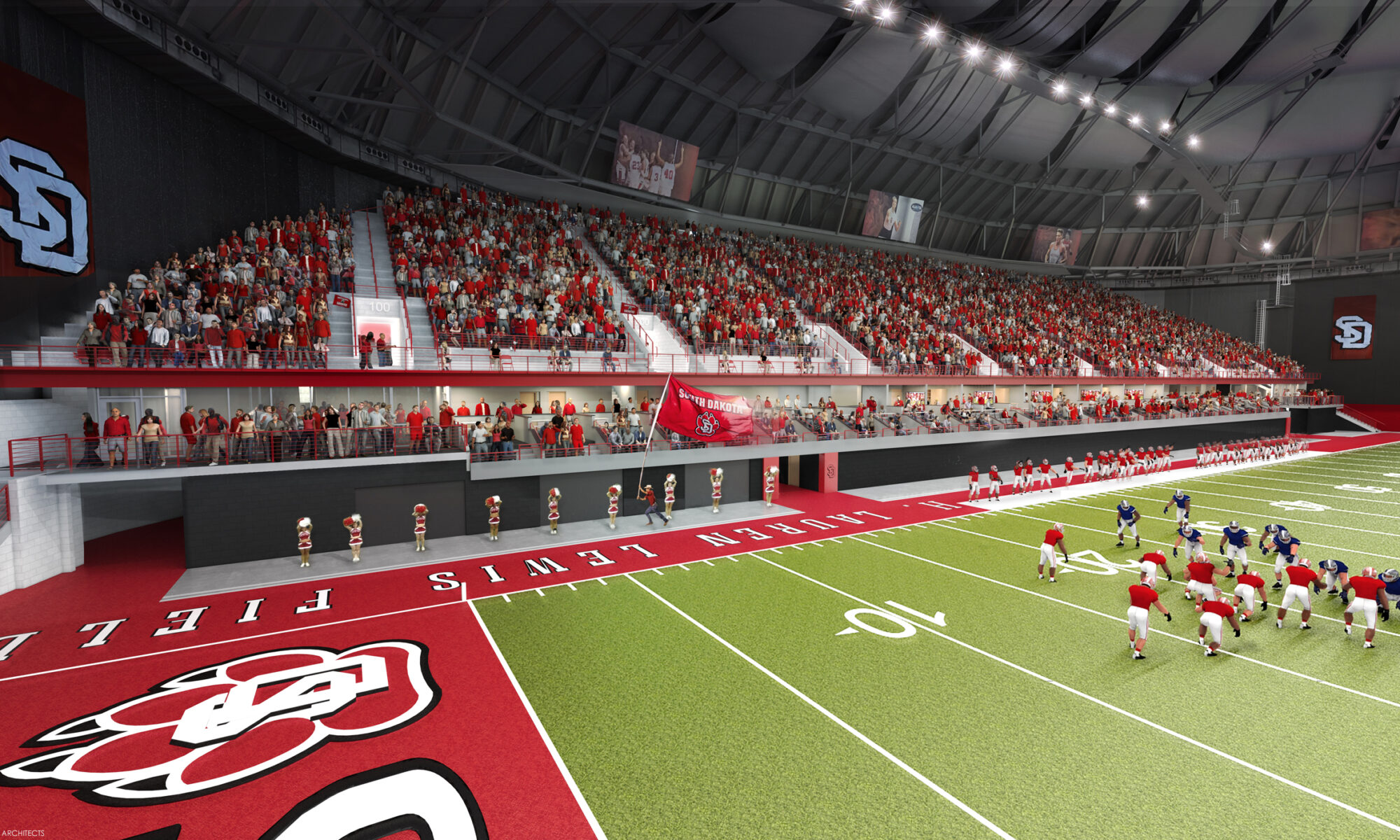 (This series was intended to highlight the new construction, renovation and upgrades to the state universities in South Dakota. Content was submitted by the architects of the projects or by the universities.)

As one of the first (and now oldest) indoor football stadiums in the nation, the DakotaDome on the University of South Dakota campus has served as the iconic cornerstone of Coyote athletics for nearly 40 years.  However, times – and sports – have changed; and so university leadership and JLG Architects have worked closely together over the past two years to transform the landmark into a championship facility that will celebrate the tradition of USD athletics, recruit top talent, win championships, and build lifelong fans.

Studies have shown over and over again that the gameday experience is as important as the number of wins in the recordbooks, and so fandom was front-and-center in planning.  New entrances, concessions, and a re-envisioned concourse were designed to make it easy to get in, get around, and get excited.  For the first time ever, the DakotaDome will have a commercial kitchen, greatly expanding food options.  A top-of-the-line sound system will totally change the gameplay for longtime fans, and all new field lighting brings the facility up to NCAA standards for the nearly DOUBLE fixed-seating capacity of the old facility.  One of the biggest changes to the DakotaDome is the addition of 10 executive suites and 15 loge boxes with unobstructed views so close to the action that they are virtually unmatched in college football. VIP parking has been added for suite and season ticket holders.

Functionality was also the name of the game.  The DakotaDome, which had not had a major renovation – outside of a fabric roof conversion – since its original construction, was maxed out in its training, practice, and game day utilization.  While best-known as the home of Coyotes Football, the DakotaDome also served a wide variety of campus sports; and the university wanted to greatly improve the usability and experience for all student athletes who would enter its doors. The transformation builds on the DakotaDome’s multifunction offerings, including farm shows, concerts, high school playoffs, and other statewide competitions.

When the DakotaDome was built 40 years ago, the west side was never completed to its full potential – ultimately “finishing” with temporary bleacher seats and zero entrances on that side.  This expansion finally realizes the plan for the west portion of the building by adding three new floor levels for the aforementioned suites and loges, a new concourse and restrooms, and public entrances with west side parking and a drop-off lane.

These current changes are not the end of the excitement for USD.  From the very beginning, the team had one goal: make it the best.  Out of respect for the current and future campus budgets, JLG developed a multi-phased, multi-year master plan that will be implemented as funds become available.  Construction has just reached Substantial Completion on Phase II – Phase I added a new field turf practice field in 2018 – just in time for the 2020 football season.  Phase III starts in early August 2020, and will construct space for Football Operations, including all new coaches offices, recruiting space, team video auditorium, team meeting rooms, and a new training/therapy center.  The University is about to open the doors to the next championship era of USD Athletics.  Go YOTES!