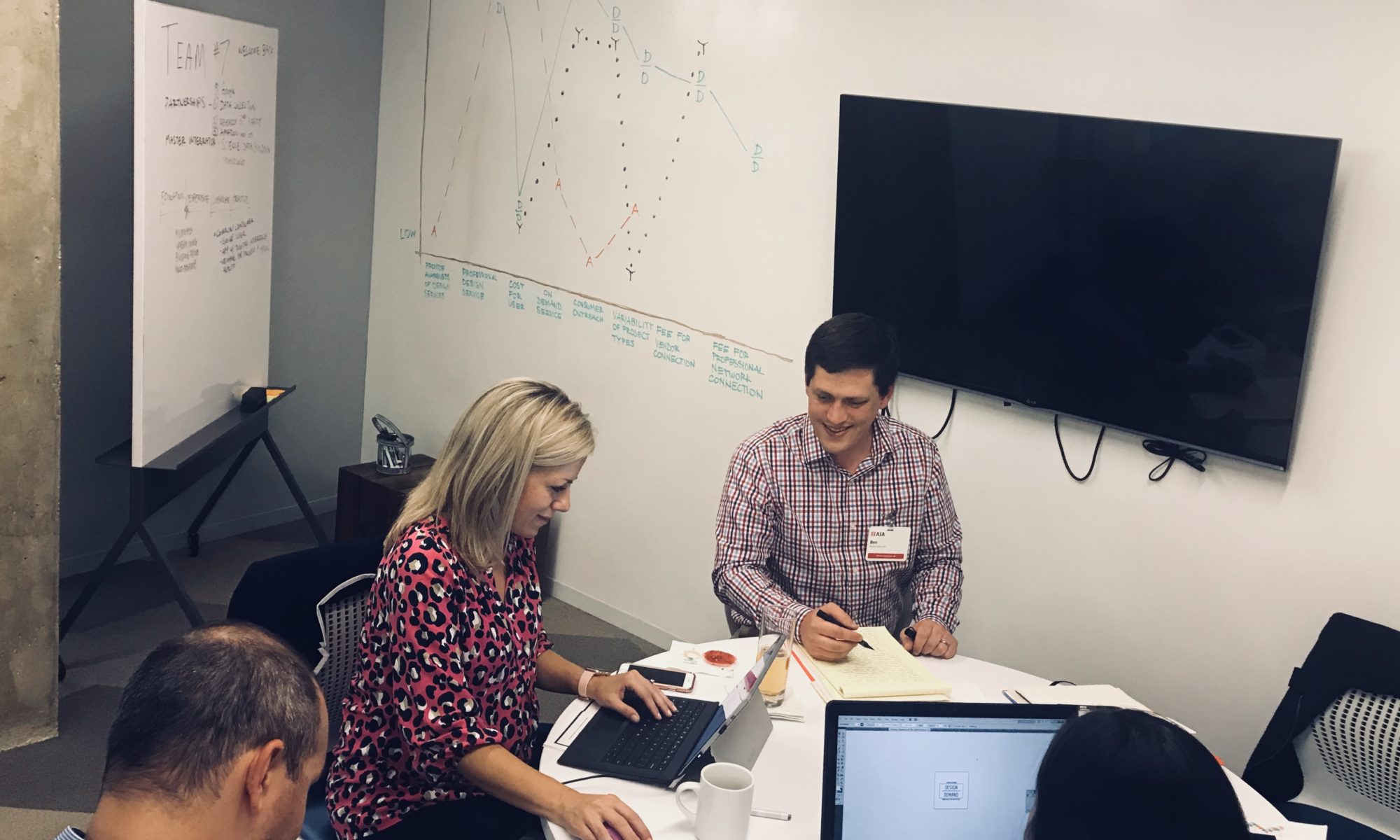 Just over a year ago, I found myself connecting with young architects from across the nation. Our goal, develop models for what the practice of architecture might look like in the year 2030. It was an exhilarating exercise, and also refreshing to see that out state and region (what many of the attendees probably would term “fly-over country”), wasn’t that far off the trends of the rest of the nation when it came to the practice of architecture.

We had several guest speakers like Susan Chin and James Patten, but the key of the whole event was to split into teams of six and develop new models for architectural practice and the delivery of architectural services. The end result was a “pitch” in front of the rest of the groups, and all voted on the team whose idea they thought was most successful. I already shared earlier this month a bit about my team and our development of “Design on Demand,” but our approach was a bit different than most.  Many other teams focused on how better to pool and collect data to better inform design. Some focused on scrapping how we build buildings altogether and instead suggested we start growing them.  In the end, most fell within three different categories, as Evelyn Lee, one of the organizers of the event, writes in an April column for Contract: Building Networks, Data-Driven Practice, and Philanthropic Design:

Building networks
The concept of networks breaks down the traditional notion of intellectual property held close to the vest in design practices. Not only are the networks a method of sharing knowledge, they enable an exchange of talent, with the core belief that work done in collaboration with others is greater than work done alone. One team’s proposal enables small firms to be competitive with larger firms that have global reach. The network concept also supports the growing appetite for remote work opportunities as an individual contributor or consultant to a variety of different projects.

Data-driven practice
Given the amount of data being collected in and around the built environment, it is not surprising that practices are looking to monetize data associated with their designs. One of the teams recommended trading design for a subscription-based data model that would support facility management in larger developments. Another team looked at how sensors could help inform subsequent projects but also report to their clients the overall utilization of space throughout the building.

Philanthropic design
The desire for practices to have a greater impact and leave a meaningful impression on their local communities was central to a number of the proposals. One team offered more than half of its office space to co-working and community events. The idea has two-fold benefits: both keeping the firm fresh with novel ideas and giving them a strong connection within the neighborhood through educational classes and community events.”

So what does all this mean for the profession?  Lee goes on to write that she didn’t expect any specific practice model to take hold on its own, but the team that won “people’s choice” actually does continue to meet virtually – as their idea hinged around the development of a network of small firms that can team up for larger projects their individual firms may not be able to take on by themselves.

What does it mean for South Dakota

For our region, I think that last idea – allowing smaller firms to team together to take on larger projects – may be the most applicable.  It is also the scariest.  Yet, we “team” all the time.  I personally have worked with teams from large regional and national firms like RDG and SmithGroup.  In fact, the successful team for the new Sioux Falls High School is a combination of the local firm Architecture Incorporated and (international firm) DLR Group.

Why is this the model? Typically, its because the larger entity has a special knowledge of a certain project type and is up to speed on the latest trends within that type.  Often, it is even because the local firm, acting as Architect of Record often required by different agencies or institutions, doesn’t have the physical people or staff to complete the amount of work required for a larger project.

While both points have their validity, I take just a bit of issue with both explanations noted above.  First of all, we (collectively as South Dakota architects) have a lot of experience in various project types in this state.  Most of the large projects have some architect of record who (hopefully) is intimately involved in the work of that project.  Speaking from experience, there is a lot of knowledge trickle-down that can occur during that process, and most of what these non-local larger firms do isn’t rocket science; it is the same info someone on the client’s side could often tell you, if you listen.  And regarding design trends – all I can say is that it is 2018.  It only takes a few clicks to see what is and isn’t in vogue.

Taking that even further, I’d argue that within our own state, we have the PEOPLE (be them architects or other professionals) with the experience and the knowledge to tackle most of the large healthcare, higher-ed, K-12, mixed-use, and various other civic projects that get built in our state – but the right people just aren’t connected to the right projects all the time.  When it comes to the knowledge of Local Firm A possibly pairing with Local Firm B because they possibly have some experience that would pair well with the other firms experience, it is difficult to make that mental (and maybe spiritual) jump because our firms are so often in competition.  Unfortunately, the assumption by clients and architecture firms alike is that we need to go reach out to XYZ Architects in a nearby large urban area as soon as the next big university, school, or other large project appears on the horizon.

But, what would it look like if a TSP and a Koch Hazard teamed up on a project, competing against the likes of a BWBR or an RDG for a large local project?  If successful, that means that the design fees spent would be kept within our state economy, the full involvement of local Architects would ensure a thorough follow-up and quality assurance since they actually live in the community the project is being constructed, and the final design would be uniquely South Dakotan.  That’s a W in my book.

The same lens can also be taken when it comes to production capability.  Not every firm has the same tools, or same ability with them, but again – to me this appears to be more about matching the right people/firms together at the right time.

For the bulk of the firms represented at the Practice Innovation Lab, this made sense, because even if they were in the same region, they weren’t necessarily in direct competition with one another.  Because of South Dakota’s unique constraints regarding population density and where architectural centers are focused, architects do find themselves in direct competition with one another all the time, so it is hard to make the mental leap from competition to collaboration.

To summarize, I ask what would our communities and built environment in this state look like if architects collaborated more across firm lines?  Would they better serve their communities, since the designers are a part of those communities?  What is a uniquely South Dakotan architecture to be discovered? Perhaps we need to run our own South Dakota Practice Innovation Lab – and see what we can come up with?

Of course, I by no means am advocating all the architects in South Dakota just abandon their firms and join into one happy architectural services commune – I’m just offering some food for thought as the biggest firms grow bigger and it becomes challenging for smaller firms to be competitive, before my privileges on this blog are revoked probably at the end of this month (kidding – mostly).  Please, share your thoughts in the comments below.

For more info about the Practice Innovation Lab, check the links and video below (I make a brief appearance at about the 3:05 mark).

Architect Magazine: The Young and the Restless: Practice Innovation Lab Wants the Building Profession to Catch Up

One Reply to “Practice Innovation Lab: One year on”