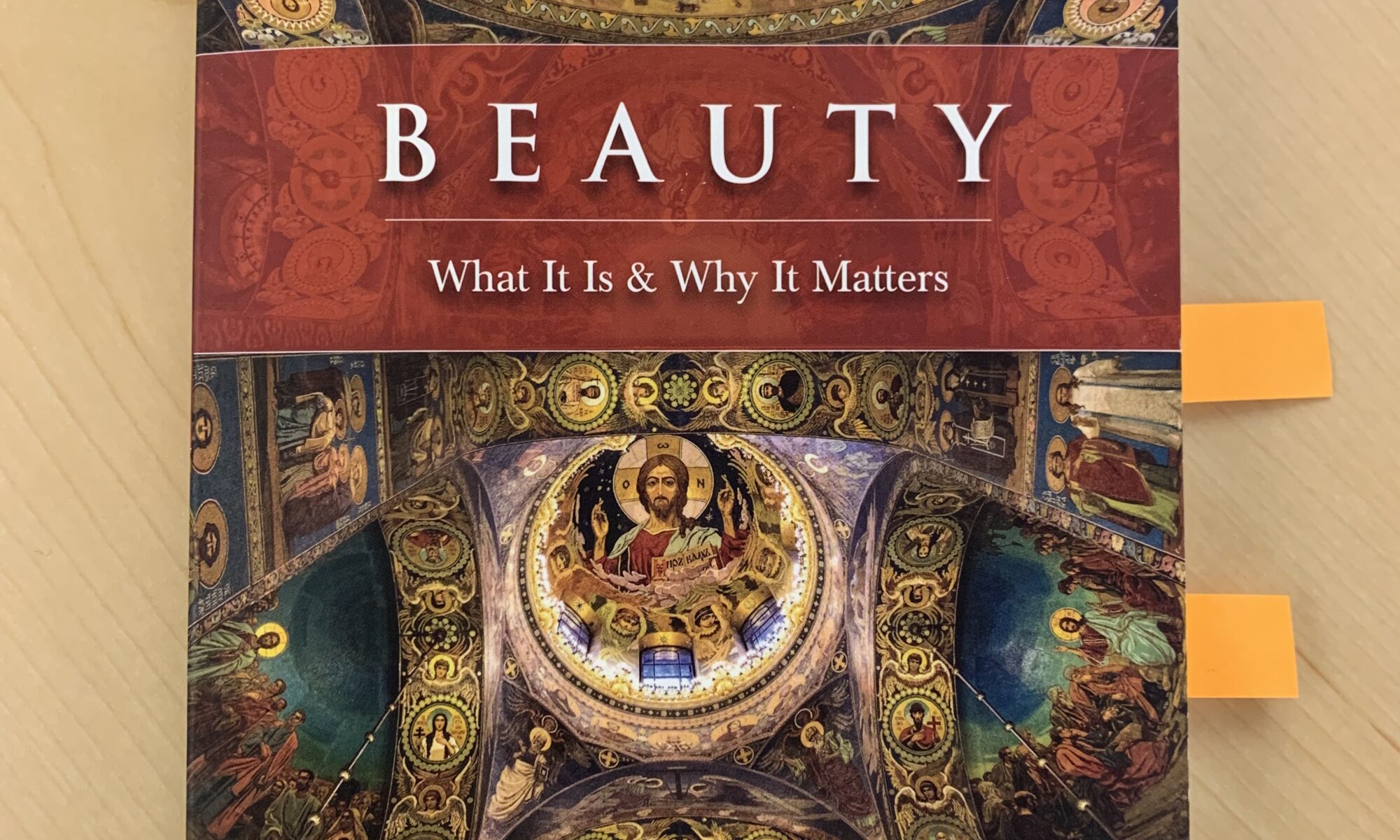 Full admission, the title of this post is stolen from the title of a book I just finished reading a few months ago, written by John-Mark Miravalle. While it detailed aspects of beauty from the traditional fine arts, it also was broad enough to cover the literary and culinary arts, and even touched on the beauty of humor. Of course, it tackled architecture specifically for a small part, but the general truths Miravalle attempted to illuminate are far reaching. I share a brief synopsis and reflection on the idea posited below, but if you are intrigued and want to know more, I’d be happy to loan you a copy of the book, or of course you can find it on your own as well (see the info at the bottom of this post).

Beauty. What is it?

It may be easier to answer what beauty is NOT. Beauty is NOT in the eye of the beholder. Miravelle begins to outline a rather counter-cultural premise that the experience of beauty is not simply a subjective response to an individual’s whims or tastes. Rather, there are universal truths to what constitutes beauty, and it essentially revolves around a duality of order and surprise as well as intellect and emotion.

What this duality boils down to, essentially, can be summarized from a second-hand quote I gathered from a silent retreat I took earlier this year:

“Moderation in all things, even moderation.”

Some may argue that order alone is beautiful, and while it appeals to a certain nature of humanity, it doesn’t bring us “out of ourselves” as a proper expression of beauty should (see “On Beauty and Being Just” by Elaine Scarry for more on this). Order alone and unmoderated, as Miravelle points out, leads rather to a senseless banality. That said, order, pattern, and framework IS required to help create the circumstances in which beauty can exist.

It is the environment that order creates in which surprise can be perceived, understood, and appreciated. Furthermore, for true beauty to occur, as Miravalle explains, the surprise must point to goodness, not just shock and horror (perversion). Vitruvius, the ancient Roman architect/engineer who many an architectural student are likely familiar, captured this in his Vitruvian Triad of what a structure must exhibit: “Venustatis” being the third principle, which can be translated as attractiveness, charm, grace, or as it is commonly referred to “delight.”

The most refreshing truth that Miravelle lays out is that there is a rigor to appreciating beauty that requires a certain temperance and avoidance of overindulging (again, moderation in all things, even moderation), otherwise nothing is surprising, and therefore nothing is beautiful.

For some direct architectural implications, one could apply this dichotomy between order and surprise to aesthetic “style.” Order creates certain rules that could easily be recognized as a style, using the same familiar elements and patterns. The beauty then comes either in how those elements are applied in a novel and surprising way, or alternatively, how that style is broken in a novel way; an argument therefore against or for “style” depending on how it is applied. Traditionalists would say that the strong “break” with the order of the style, however, is too “shocking” or “perverse” and not oriented toward temperance and goodness.

Why does it matter (for architecture)?

In “The Aesthetics of Architecture”, Roger Scruton writes:

“Only by transforming the world into the visible and tangible record of things rationally pursued, can a person find a place for himself there: without that place there will be no self to furnish it….Everyone has a need to see the world around him in terms of the wider demands of his rational nature: if he cannot do so he must stand towards it in an “alienated” relation, a relation based on the sense that the public order resists the meaning with which his own activity seeks to fill it.”

There is plenty of irrational or, to put it differently, disordered architecture out there. So many glitzy renderings for high-profile projects or the milieu of glassy hospitality and retail proposals dispense with rationality for pure shock and awe, forgetting that the people they are designing for have a fundamental need to relate to a space. That sort of architecture, while perhaps iconic at one point, is generally doomed to ignominy as tastes change or worse: its ability to endure becomes significantly challenged.

Take Frank Gehry’s Bilbao Guggenheim, for example. Iconic at its original inception, it has now become an archetype that many users recognize as lacking much in function (created by order) other than the ability to shock and awe.

Because of this trademark approach of Gehry’s, one could argue that it has become a “style” and the repetition of its chaos throughout different types of venues and building types is really a form of banality (no surprise) and thus not beautiful. Miravalle would likely agree with this assessment as well, as he describes a couple of Gehry’s U.S. based projects as “indulging in raw disorder.”

This indulgence in disorder or idiosyncrasy, it should be noted, is closely related with pride and individualism, which is a topic I also hope to hit on later this month…

There has been a trend to glorify pure function in architecture as well (i.e. Louis Sullivan’s “Form follows function”). But function alone does not make a building stand the test of time, despite the inherent flexibility that a functional and orderly layout might provide. Designing a structure purely for a single function, and ignoring its relationship to the context and fabric around it (and one could argue, the tradition behind it), yields to buildings no one cares about or wants to save. To be clear, Sullivan is not necessarily guilty of this in his work, but some architects who maybe took the maxim too far could certainly be accused of banality.

Balancing beauty and versatility, in some regard, the whole premise for the National Park Service National Register of Historic Places, which recognizes and seeks to preserve buildings of unique historic character (beautiful), so that they can be used into the future – without making them uglier (which would then make them less likely to be saved and reused).

As Miravalle explains, buildings made with nothing in mind but their momentary function tend to be abandoned in time. Quoting Scruton again:

“When form follows function it becomes as impermanent as function….. Nobody wishes to conserve a building if it does not look right; but if it does look right, someone will find a use for it.”

Miravalle goes on to explain that vulgar efficiency and expressions of ego do not relate to broader humanity; “We have a proclivity for buildings that correspond to our natures.” This then, becomes an imperative assertion in how a building interfaces with the public realm. What is the building design communicating – something to bring people together or set them apart?

Furthermore, this notion can be translated not just into the responsibilities of an architect (in ensuring design work is beautiful) but even for building owners or homeowners. Letting a building or property degenerate into shameless spoils the rest of the community. As Miravalle succinctly puts it, “this “broken-window” theory of urban decline… …reminds us that beauty is edifying, and ugliness is socially corrosive.” In that same token then, it is also an owner’s/developer’s/designer’s duty to practice (once again) this notion of moderation in projects as well, rather than a complete reversal of a neighborhood that has “declined” and avoiding that curse of gentrification that pushes certain communities out of an area.

Ultimately, beauty matters for architecture because it calls architects to design for the common good, not just the function of the here-and-now, lest that focus on efficiency can lead to vulgarity.

“Beauty: What It Is and Why It Matters” by John-Mark Miravalle

“On Truth” by Harry G Frankfurt

“On Beauty and Being Just” by Elaine Scarry

5 Replies to “Beauty: What It Is (and Why It Matters… to Architecture)”