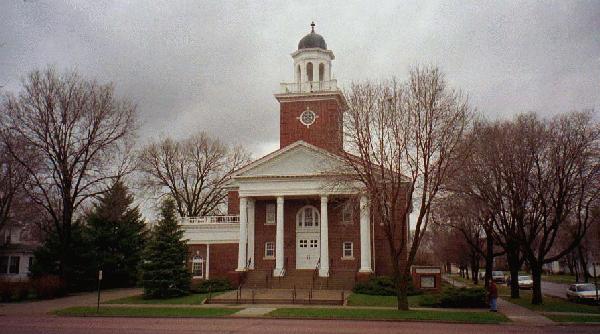 Her name was Margaret Wellington.  She was the wife of Dr. Raynor Wellington, history professor at the University of South Dakota in Vermillion.  Margaret was a member of the building committee for a new home for the First Congregational Church in Vermillion, South Dakota (now known as the Vermillion United Church of Christ, Congregational).  Church records state she was “enthusiastic about seeing a bit of New England Congregationalism let down in South Dakota” and believed that “a state which was credited with having the largest percent of Congregationalists per population should preserve some of the best traditions of the denomination.”

She had a vision.  That vision was probably found at their previous church near Wellesley University.  The resemblance is clear with the same four columned portico, bell tower and meeting house plan. Mrs. Wellington designed the first rough plans of the new building and her artistry was responsible for many of the beautiful details.

The architect was Buettler and Arnold of Sioux City, a prominent firm of the time.  The building was completed in 1929 and is recognized as an example of Colonial Revival architecture. One of the most significant things about this church building is that it is almost exactly like it was originally built.  The only addition was for the elevator in 1991.  It is unusual for buildings to continue in their designed purpose and footprint for that long.

For 93 years, the church has sat proudly on the corner of Main St. and Harvard Ave. There are three historic districts within a block of the site, the Downtown Historic District, the Forest Ave. Historic District and the University Historic District.  This building contributes to all of them but is not included in any of them.  That might have been a result of church members being concerned that a historical designation would hamper future plans for the building.  That is a common rumor but is simply not true.

About five years ago, the congregation voted to pursue having the building placed on the National Register of Historic Places.  This designation would protect the building in future generations and provide access to funding sources to help maintain the facility, primarily the Deadwood Fund.

Getting a building listed on the National Register of Historic Places is no small feat. The application looked simple but the expectations were not.  The first step was preparation of Preliminary Assessment Forms.  This entailed a visit from the State Historical Preservation Office (SHPO) and a staff review to determine if the building met the criteria.  Just being old and well built is not enough.  It had to be demonstrated that the building was an important example of its architectural style.  A succession of capable church members worked on the application for a couple of years and finally determined that the task was too technical to be done locally.

Liz Almlie, the SHPO representative for the south part of the state was asked to assist.  The project was placed on a list and, when the time came, she started the process of preparing the nomination.  She made site visits, took photos, poured over church history documents and interviewed members of the congregation. In the end, the nomination document was about 75 pages, complete with photos and drawings.

Once the draft had been edited by the staff at SHPO it started the Statutory Review Process. There are specific state and federal regulations that have to be met.  The draft nomination was sent to the Vermillion City and Clay County offices for review as well as the city and county Historical Preservation Commissions. Presumably, if any of these agencies had concerns, they would have been investigated.  The next step was the State Review Board which meets quarterly.  The final nomination is then forwarded to the National Park Service which has the Keeper of the National Register of Historic Places. Upon review and approval, the property is then placed in the National Register.

The more than 96,000 properties listed (as of the end of 2020) in the National Register represent 1.8 million contributing resources – buildings, sites, districts, structures, and objects.  Almost every county in the United States has at least one place listed in the National Register.  The First Congregational Church of Vermillion is one of the most recent entries, a fact that would make Mrs. Wellington very proud.