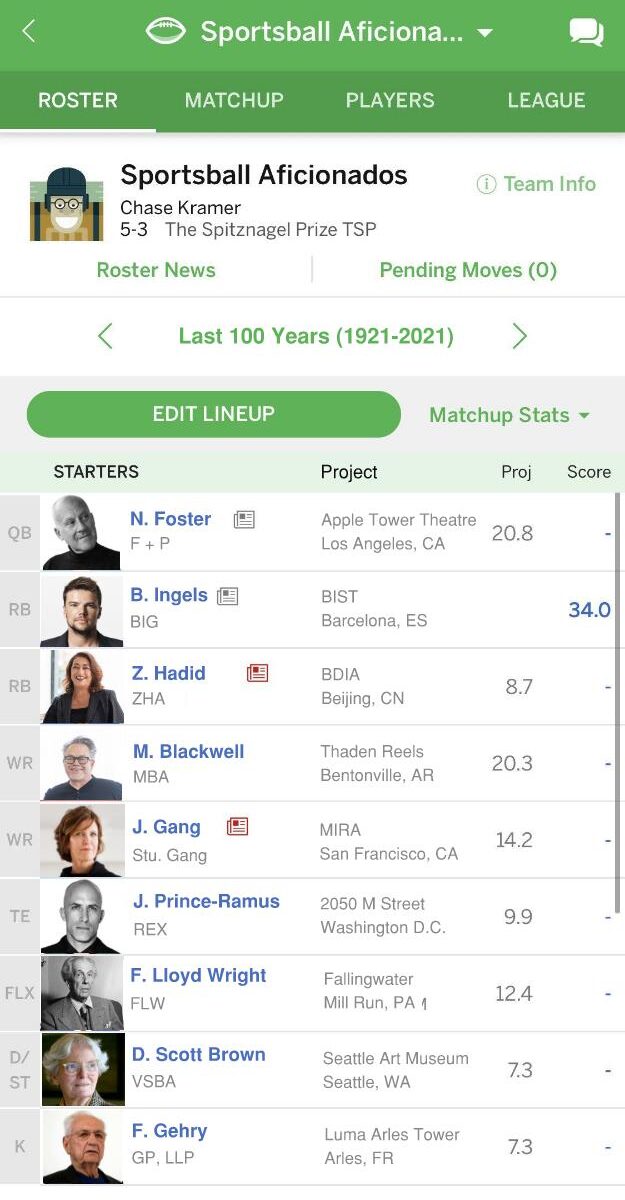 For those who don’t play fantasy football, the season is headed into week 11, which means there are some defining moments coming up for who will and won’t make playoffs. At our TSP office league, my head is certainly in it to win it, coming off a 6 win streak after a slow start this year. Here’s hoping Van Jefferson can perform tonight like Robert Woods (he can, if given the chance).

I’m a late comer to the whole fantasy football craze – and, frankly, sports enthusiasm in general (my team name revealed above in the cover photo is just a bit “tongue-in-cheek”). But I find the act of projecting, guessing, and overall statistics approach to fantasy sports triggers the nerd-neurons in my brain, so I’ve been hooked ever since participating in the first work league a number of years ago.

So, with part of my brain focused on football right now, it certainly means I looks for overlaps in how we might think and be informed about the practice of architecture in terms of fantasy football. Formulating this is a good exercise in how we define success in architecture. Billings? Awards? Overall community welfare? Perhaps some amalgamation of all the above, where each factor is carefully balanced and formulated into an equation that gives provides a stable result (note, the cover image is by no means an attempt formulate this).

That all said, it is easy to quickly abandon that more philosophical thought exercise about success and jump to the fun part – who would be on your team? Or equally fun (IMHO), how would each fantasy-relevant position be defined within an architectural practice? Below is a breakdown of my thoughts, and I’d appreciate your comments as well, if you have some ideas on how a Fantasy Architecture Practice might be set up.

QB (Quarterback): The person who has to delegate, make some tough in-the-moment calls, follow codes and standards (playbook), and sometimes carry the rest of the (project) team by doing a bit of the work (running) themselves. This one is pretty straight-forward, though the actual title of this might vary from firm to firm; this has to be the Project Architect/Lead Architect.

RB (Running Back): The person who has to run the ball over and over, sometimes breaking free of the grind, but often times only making modest gains downfield. They rely on other team members to block for them so they can get through, and on many teams they bring high fantasy value. This could be a number of roles, depending on the firm. The ability to keep pushing ahead, little by little, taking direction from the QB and even sometimes stepping into a small “receiving” role where they have to run with what they are provided means that this could be the Technical Lead (traditionally draftsperson), or, in larger firms/on larger projects, an early/mid level architect, or even an intern.

WR (Wide Receiver): This person has to catch the ball and run with it – sometimes from way-out. Their ability to maneuver can make or break a play, and they have to be fast to be successful – often responsible for the biggest plays of the game (project). I see this as a Design Architect or Design Leader role on a project – the person responsible for larger gestures of the project progress, and someone who has to THINK fast especially in the ever tightening time constraints clients are demanding on projects.

TE (Tight End): A somewhat specialty role, sometimes working as an offensive blocker, but also playing a similar role as a WR. I see this as the specifications writer. They have the technical expertise to play a detailed offensive role (design) when called upon, but the offense (design team) can rely on this person to back them up when necessary with the proper product and execution requirements.

D/ST (Defense/Special Teams): An offense’s job is made easier by a good defense. If the entire execution of the game (project) can’t be done effectively, it puts more effort on offensive players (up-front/design team). I see this role as our beloved Construction Administration Professionals. They ensure the plans of the design and production team are realized and adhered too – prevent the opposition of “in-field issues” that come up, differences in “document interpretation”, etc. from gaining much ground against the design intent and success of the project. Sometimes with their “interceptions” of construction issues, they have to pivot mid-field and run the ball offensively (re-design on the spot), hopefully for a touchdown.

K (Kicker): A highly specialized role, this could be a lot of different roles within a firm. Often times the kicker can account for a lot of success in a game, so they have to be consistent, but they are not “on the field” very often. For this, I designated the role of Marketing/Sales. This role is essential for every firm, even if provided by the same person who might be the QB/RB/WR/etc. all in one. In larger firms, it isn’t even fulfilled by someone with an architecture background (similar to kickers with very little other “American” football experience), but certainly is performed in conjunction with the architectural teams. Sometimes, even, a Marketing team’s response to an RFP can literally knock it out of the park like a 60+ yard field goal and win a team some new work, or someone’s relationship with another professional can put them in the right place at the right time, getting a firm a high profile project they never could’ve dreamed of being able to work on.

Ultimately, of course, no one role can make a project successful. Each role, in some degree, has to be successful (even if performed by the same person, such as in a sole-proprietorship). For the best results, it takes a team (more so than the individual personalities represented by the cover image of this post) to really make a project successful. Sometimes the project is a bit more straightforward and doesn’t require as much downfield play by the WR (Design Leader), and the RB (Technical/Production staff) needs to just run the ball a bit more as the project progresses. Sometimes the design solution has to be the answer to winning the game, and you throw it down-field instead of trying to run the ball. Every project is different, and takes a different series of roles and plays to make it successful.

Who, then, is the coach?