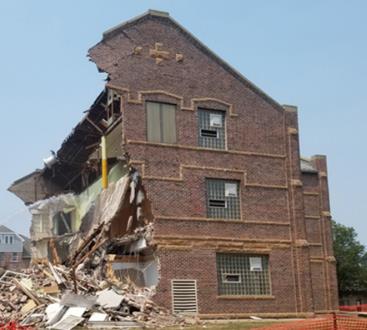 Not all historical buildings can be saved.  I love old buildings and have spent much of my career protecting them, renovating them and repurposing them.  There is a little of our history that dies when we lose one.

We lost a significant one recently. Dakota Hall, on the campus of the South Dakota Development Center (SDDC) in Redfield, South Dakota, was built in 1909 as a dormitory.  It was demolished on July 27, 2021.

Over the years, the SDDC had several names:  Northern Hospital for the Insane (1902); State School and Home for the Feeble Minded (1913-1951); The Redfield State Hospital and School (1951-1989) before it acquired its current name.  It is a state facility devoted to the care of people with cognitive and developmental disabilities. When it opened in 1902 it had 45 residents.  The residents of the center increased as the state population increased with 471 in 1918 and 1,199 by 1963.  The Developmental Disability Act of 1970 changed everything for SDDC.  The act directed that people with disabilities be served by their communities in the least restrictive environment possible.  Today, the SDDC serves about 100 people.  This number is in line with the size of other agencies throughout the state.

The building in question, known as Dakota Hall, was not the earliest or most significant building on the campus.  The administration building was built around 1902 in the style of Wallace Dow, the most significant architect of the time, called the Builder on the Prairie. This building, known locally as “The Granite” building, was built in the Romanesque style of Sioux Quartzite stone.  Research would have to be done to identify it as a Dow building.  This building is still in use.

Dakota Hall was also a very fine building in an entirely different style.  The 27,250 SF building was designed by Hockman and Schweiger of Watertown, SD.  Not much is known about Schweiger but Maurice Hockman was born in Indiana in 1878. He studied art prior to his education in architecture. He moved to Watertown in 1902 and established a solo practice before partnering with Schweiger. Between 1904 and 1917, Hockman had over sixty commissions throughout South Dakota and Minnesota.  His buildings are mostly a restrained classical design.  Most are brick with limestone accents.  Dakota Hall is such a building.  The upper floors were designed as large open barracks-style sleeping areas and were closed in the 1970’s.  The first floor was used for workshops and storage until the first part of this century.  The utilities had been turned off and the windows boarded for many years.

Dakota Hall, originally known as Ward No. 1, Boys Dormitory, was gabled brick construction with contrasting stone accents.  There were cross gables at each end bracketed by vertical buttresses of decreasing depth.  The building had very large windows for natural light and ventilation with a bay window over the front entrance.  While nicely detailed, the building was reminiscent of many residential school buildings.  In my opinion, the building was neither an exceptional example of its time nor its architect.  There are many better examples of Hockman’s work. While neither the fault of the building, the architect or the current agency, the building represents a sad chapter in the care of people with disabilities.  The building is not on the register of state or national historic places.

Apparently, it is difficult to demolish a state building.  The SDDC is trying to “right size” its campus.  Part of their acreage was a former farm where agriculture was taught to residents.  This land has been transferred to the city of Redfield.  Dakota Hall was on state land and, because of the need to protect the residents, could not be repurposed for a community or business use.  While it doesn’t take an Act of Congress to demolish a state building it does require a legislative bill.  In this case: 2021 SB36.  I listened to the hearing of the State Committee on Appropriations and was impressed by the presentation by the Department of Human Services and the thoughtful questions of committee members.  There was an effort to reclaim the bricks on a previous building and they are still in a pile, so, no materials were reclaimed from this one.  The debris from this building is buried on a remote part of the campus.

So, no, not every historic building needs to be saved, but it is important to remember the history and importance that buildings represent in our state.

With appreciation to the following for their contribution to this article: