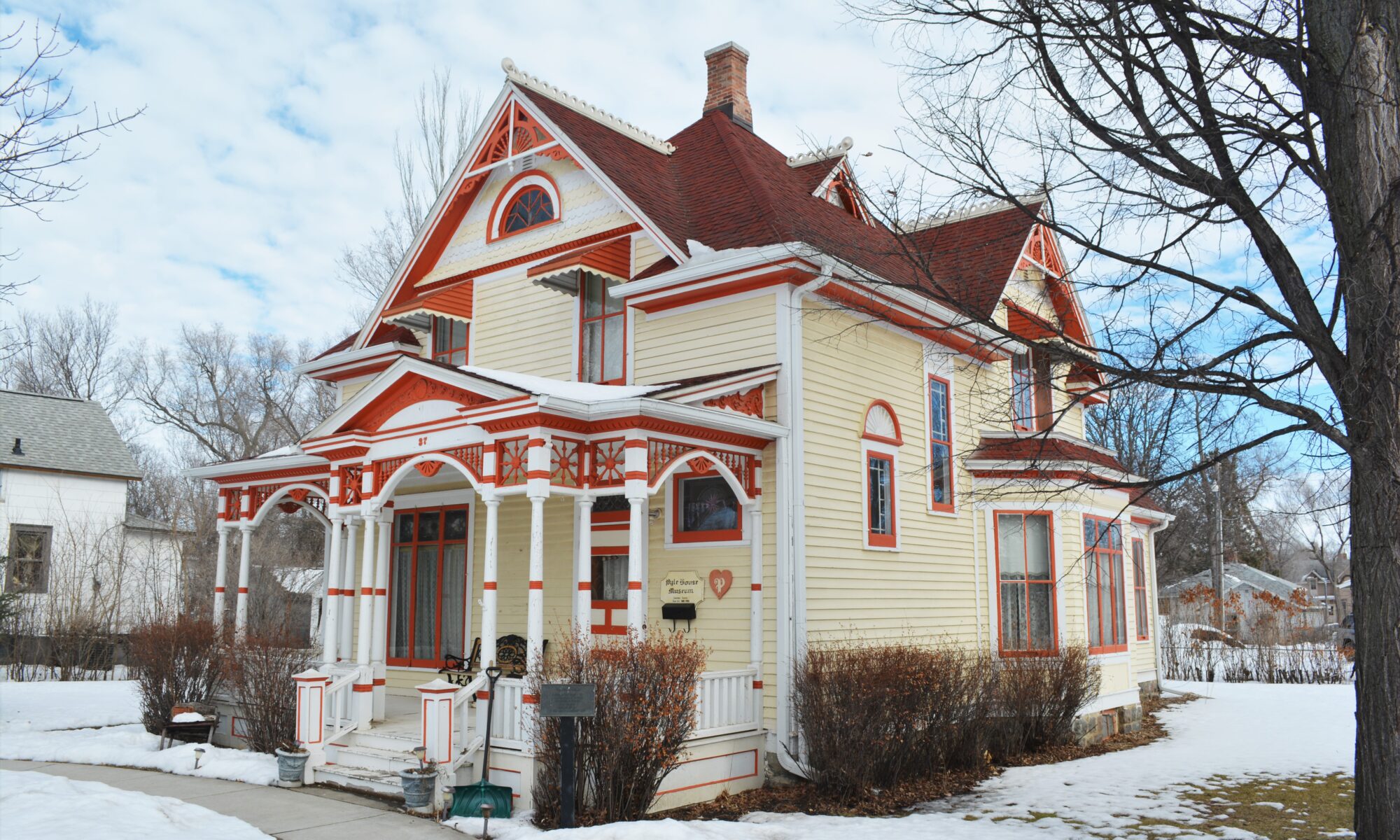 South Dakota and the United States have recently marked big centennials of women’s suffrage.  A state constitutional amendment passed in November 1918 and the final ratification of the federal 19th Amendment took place in August 1920.  I was lucky enough to participate in several public history projects around these centennials.  One of these projects, the National Votes for Women Trail, was started by the National Collaborative for Women’s History Sites.  NCWHS set up a form on their website to collect locations and information about the sites, and they recruited state coordinators to work on each state’s entries.  To populate the map for South Dakota (an ongoing effort), I looked through published histories of suffrage and conduct new research.  I began to see a wide network of places and routes across the state where suffrage history happened.

Suffrage work happened in homes.  In houses, suffragists held campaign organizing meetings, hosted clubs and “parlor meetings,” and gave hospitality to touring speakers.  In Huron, one of the South Dakota Equal Suffrage Associations’ first organizing meetings was held in 1889 in the house of John H. and Emma Smith DeVoe, and it became a headquarters for Susan B. Anthony while she campaigned in South Dakota in 1890.  Anthony also stayed with John and Alice Pickler in Faulkton.  The historical society that manages the fascinating Pickler Mansion museum has even restored the room used by Anthony with rose-patterned wallpaper, according to a description she put in a letter about the trip.  In 1909 in Sioux Falls, Frances Carpenter hosted a reception at her house for national leaders Anna Howard Shaw and Rachel Foster Avery, who were visiting for a state convention held to kick-off another ballot campaign.  A press article described that “the spacious rooms were taxed to their utmost capacity to accommodate the large number of club members and friends assembled” (1).  In 1913, Dora Cassem decorated her house in Mitchell “in suffrage colors” for a luncheon meeting of the Bide-a-While Club—a local woman’s club (2).  Another house in Huron, that of the South Dakota Universal Franchise League (SDUFL) president Mamie Shields Pyle, became her post-election office in 1918 after budget concerns led her to give up the UFL’s downtown office (and her stenographer).  Built in 1894, the Pyle House is now a museum and with remarkable Queen Anne style architecture, family collections, and the stories of Pyle and her daughter Gladys—who became a ground-breaking politician at both state and national levels.

Suffrage work also had a place in commercial buildings.  In 1909, the state Votes for Women president, Lydia Johnson, ran the first part of that year’s campaign from her Fort Pierre law office.  Later, the organization voted to have headquarters in downtown Sioux Falls.  They rented offices above the O.C. Cadwell & Co. music store, where they had three rooms that fronted Phillips Avenue and gave them good public visibility.  In other years (in 1890 and from 1914 to 1918), the state suffrage organization had headquarters in downtown Huron.  In 1918, Pyle and the SDUFL had Rooms 13 and 14 in the Masonic Temple block on the northeast corner of Dakota Ave S. and 4th St SE.  As suffragists campaigned in their various communities, some supportive business owners displayed suffrage signs and posters in their windows.  Others served as a central point in town for suffragists to collect contributions or distribute campaign literature.  There was even a case in Mitchell in 1914 where the Gillis Shoe Store held a special event to donate a portion of that day’s sales to their local franchise league.

A lot of suffrage campaigning was done through public speaking.  Scheduling a suffrage speaker meant finding a venue with enough space and a speaker platform, but also required either sufficient funds for rent or a supportive property owner to donate the use.  Suffrage lectures, speeches, and conventions often were held in public buildings—mainly courthouses—but speakers also appeared at opera houses, schools, and churches.  Some of these buildings are still standing: the Grand Opera House in Pierre, the Krikac Auditorium at Northern State University in Aberdeen, the First Presbyterian church in Madison, the Roberts County Courthouse in Sisseton, the city hall building in Hot Springs, and the Homestake Opera House in Lead.  Local suffrage associations also used community buildings for regular meetings and programs.  Watertown’s franchise league often met in the basement of the city’s Carnegie Library (now a county museum), the Mitchell League of Women Voters held luncheon meetings in their Carnegie Library (also now a museum), Madison’s franchise league met in the high school (now senior housing), and Lawrence County suffragists hosted a training event at a Methodist church in Deadwood (demolished in 2003 and now a memorial park).  In rural South Dakota, suffrage work in community space included a wide variety of events, from holding an orange basket social at the Tyler schoolhouse in Badger Township (Davison County) in 1898, to giving a speech surrounded by grazing sheep at a Fourth of July picnic at Lodgepole Butte in 1914, to dropping flyers by airplane over the Fourth of July revelers at Ruskin Park by Forestburg in 1918 (3).

It was and has long been a political campaign strategy to get the word out at popular public events.  At the Beadle County Fair in the fall of 1889, local women and men spoke on suffrage to “densely packed” crowds who visited the women’s exhibits in the Floral Hall tent, despite “dust that was driving in blinding clouds by a strong northeast wind” (4).  For Women’s Day at the 1890 state fair in Aberdeen, suffragists paraded several prominent speakers from the Hotel Dayton downtown to the fairgrounds’ grandstand, accompanied by a group from the state Women’s Relief Corps (a Civil War veterans association) as well as a brass band and drum corps, both “composed entirely of women” (5).  In 1909 to 1918, suffragists had booths, made speeches, and passed out literature at the Women’s Building at the state fair in Huron, as well as to crowds attending the Corn Palace in Mitchell, the Interstate Grain Palace in Aberdeen, and summer Chautauquas at Lake Madison and Hot Springs.

Suffragists made five-minute speeches from train station platforms, traveled hours by wagon only to be turned back by opponents in a small town, and one even broke a rib during an automobile ride over rough roads during a statewide campaign tour.  Though speech-making in outdoor public spaces was not traditionally a woman’s “place,” a few women campaigned for the right to vote on busy street corners or by standing in their automobiles.  Clara B. Colby of Beatrice, Nebraska, and Rose Bower of Rapid City each chose the wide veranda of the Evans Hotel in the center of downtown Hot Springs for speeches in 1896 and 1910 respectively.  On a cold October day in 1916, a suffragist visiting from Green Bay, Wisconsin, spoke in front of the Dakota State Bank building on the corner of Egan & 5th in Madison, where “despite a breeze which was too chilly for comfort, a considerable number of men and women heard Mrs. [Maud] McCreery’s address, given from an automobile drawn up to the curb line” (6).  That same year, suffragist Elsie Benedict of Denver followed an anti-suffrage speaking tour around the state.  In Pierre, Yankton, Watertown, and elsewhere, she posted herself at prominent points outside their venues to give counter-arguments and promote suffrage as their audiences were leaving.

At the center of the whole movement was one building—the state capitol building.  For every legislative session, suffragists traveled to Pierre to advocate for suffrage bills.  They testified at committee hearings and circulated in the lobbies to talk to legislators.  Over the years, they watched debates and waited for vote results in the galleries of the House and Senate where they applauded loudly for favorable speeches but also endured statements of dismissal or ridicule.  In January 1919, as the influenza epidemic was finally fading, South Dakota suffragists held their ‘jubilee’ convention in Pierre during session.  While in Pierre for the convention, Alice Lorraine Daly, a faculty member in oratory at the college in Madison, was invited to address the legislators in the senate chambers.  Newspapers said it was the first time that a woman had spoken from the senate rostrum in that building.  During that same session, when three young women were sworn in for clerk jobs at the capitol, Pierre resident May Billinghurst attended the ceremony.  She had worked for years on equal suffrage, as had her sister Ruth Hipple.  Billinghurst afterwards wrote that “…nearly the whole body applauded.  The first time in history of the state for women to apply for such places; I could not help but wonder if they realized who made it possible for them to attain those places.  As I glanced around at the older suffrage women looking on I imagined I could see in their faces happiness and then sadness and a far away look that told of the long struggle” (7).

Our South Dakota buildings fill with stories over their lifetime.  It can be powerful to learn the breadth of history that passed through a particular space or to stand in a space where icons of American history have stood.  It is of civic and educational value to have stories of place and the places themselves to study and understand important aspects of our nation’s history.  South Dakota’s suffrage places show us how these men and women did their work to further their cause, and how important it was for them to carve out public space for discourse and debate on voting rights.

One Reply to “The Built Landscape of Suffrage History”