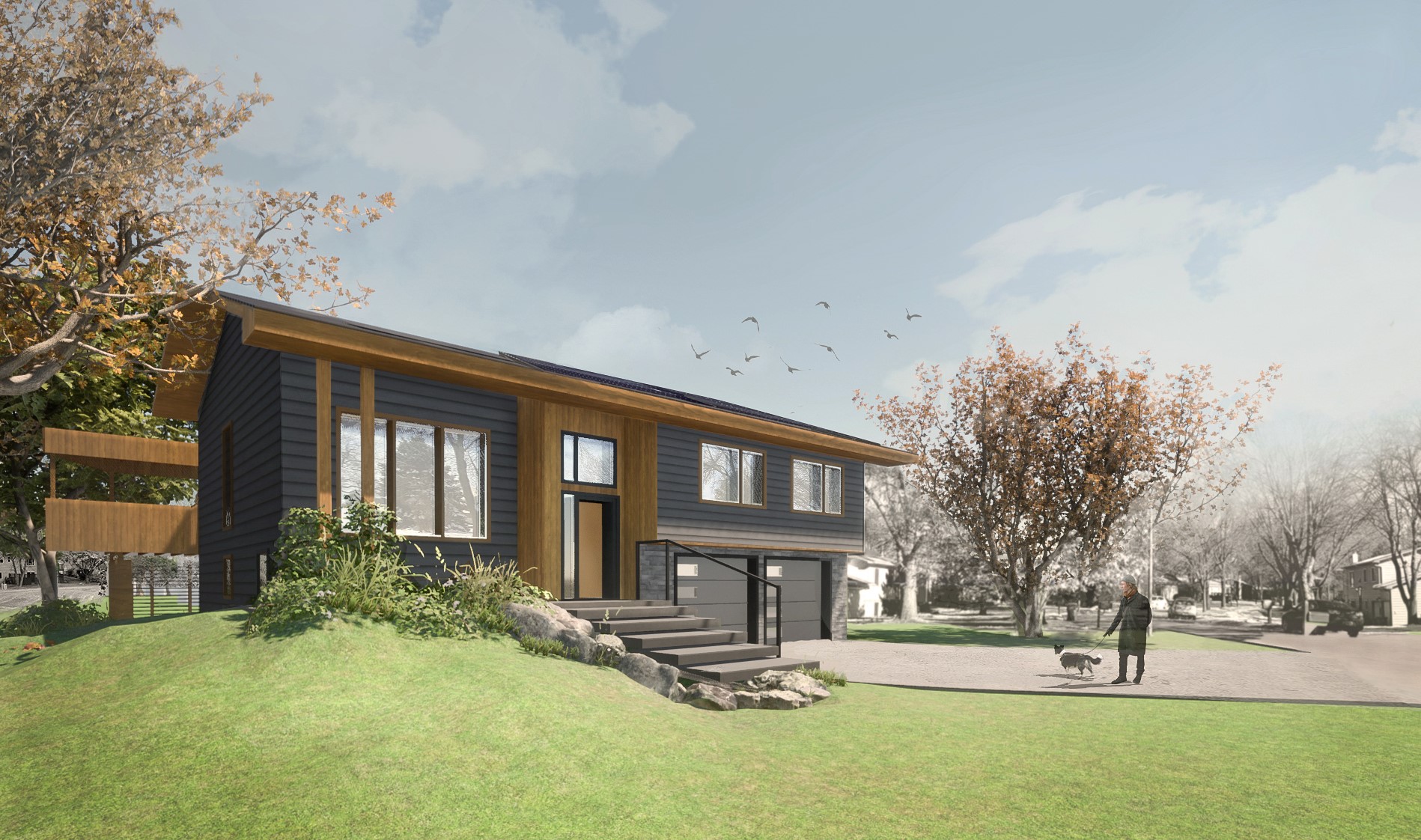 The first passive house, or PH01, was a venture taken by South Dakota State University department of Architecture students and faculty in Brookings, SD. Two passive houses have been designed to meet the Passive House Institute of the United States (PHIUS) standards since then. PH02 is a single-family residence that utilizes a detached garage separated from the house by a courtyard like that of its southern neighbor, PH01. PH03 took on a different challenge in fulfilling PHIUS standards with its design focusing on retrofitting a split-level single-family residence on the southwest part of Brookings, SD.

Throughout the next few posts, Passive House 3.0 will be comprised of 4 parts;

Research began by seeking out six different housing typologies and selecting houses in Brookings, SD that could see to potential passive house characteristics. The team looked for south-facing orientation on the longitudinal east-west axis, distance from the city’s core and nature, zoning type, shading of surrounding buildings, a simplistic shape, and market availability. A split-level on Santee Trail in the southwestern part of Brookings, SD was the winner.

The split-level occupies a corner lot on Santee Trail in Brookings, SD. Because of the site’s irregular shape, setbacks allowed minimum expansion. The split-house hit every passive house potential mark besides its relationship to nature and a simplistic shape. Sure, Indian Hills park occupied the backyard, but there was a lack of connection from the front entry to the back porch of the house. Because of this, the team’s idea of architectural “bookends” created a more welcoming entry and a visual journey through the house and into the backyard spaces with each occupying different heights and views to the park.

One small, yet major, move transformed the house internally and formed the basis of the entry bookend. An 8’ extrusion to the garage and southeast bedrooms allowed for many spatial moves in the interior. These internal changes included: a laundry room placed near the upper floor bedrooms, turning 1.5 baths into 2 full baths, a larger master closet, and an extra room on the lower level. Because the roofing was old and needed replacing, it supported the extrusion and became part of the bookends, as well as shading for the south-facing windows. The 8’ extrusion allowed for the front bookend to surpass surrounding split-levels, yet a front entry extrusion took it even further.

A 4’ extrusion to the front entry improved the typically compacted entry landing of the split-level typology. Another small, yet major, move to further improve the expansion of the front entry was the team’s decision to cut away part of the living room on the upper floor and allow a double space to occupy adjacent the landing. This created an even more spacious entry and allowed light from the large floor-to-ceiling south-facing windows to penetrate through to both floors. A decision to shift the stairs traveling to the lower level from the east to the west side of the upper stairs allowed for a coat closet on the landing–a luxury typical split-levels fail to have. In playing with the compacted nature of the split-level and further opening up the interior, the team decided to expose existing ceiling and floor joists. 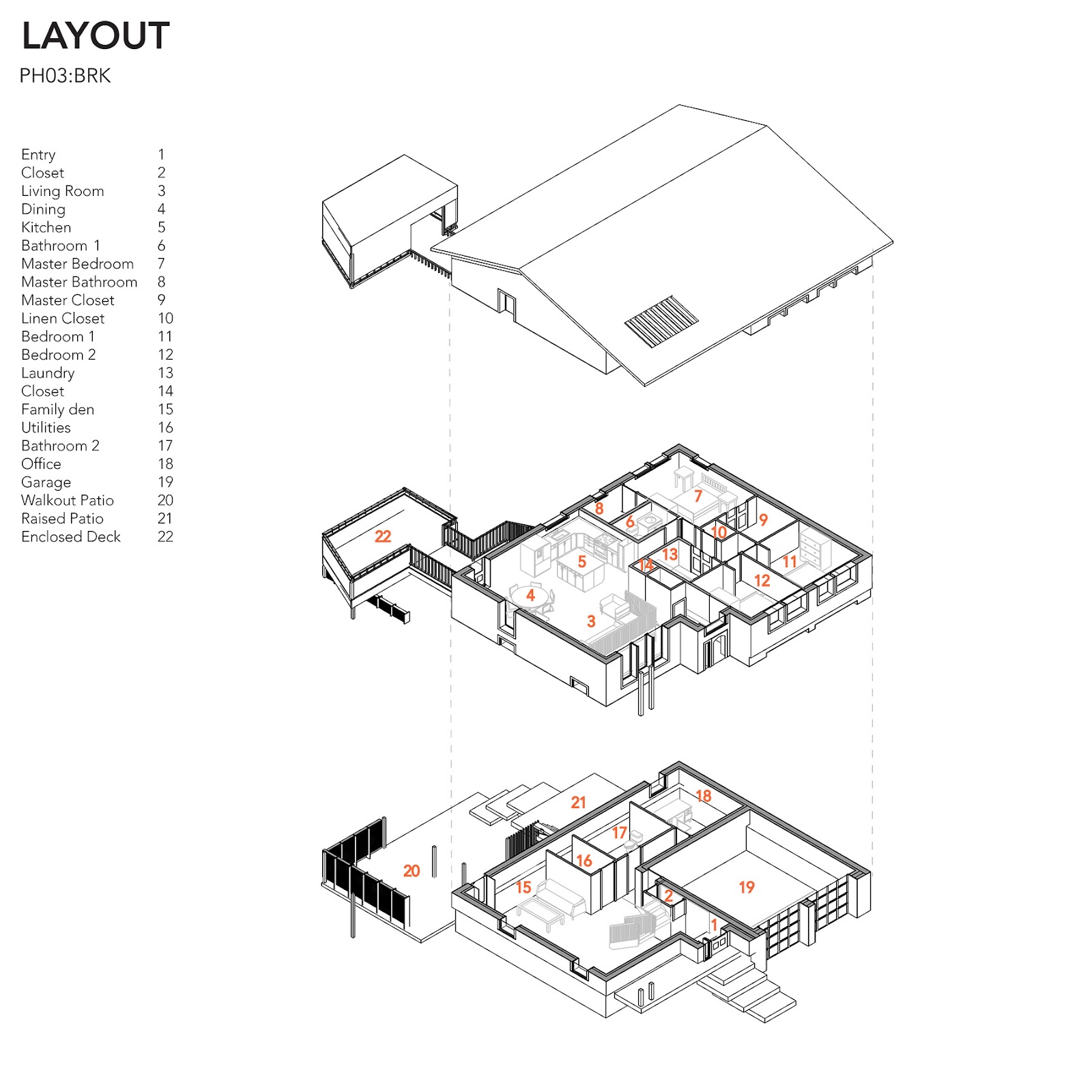 Every move is reflected on the sequence taken through the house from arrival upon the front steps to the multiple views the back courtyard provides.

The front bookend begins the journey from entry to park. Floating stair slabs move up with the topography to a front porch. This exhibits a more welcoming entry than surrounding split-levels with their entrance being flush with the façade. Upon entering the front door, the large picture window in the kitchen creates a wonder beyond as is draws a visual axis up the stairs from the entry landing. Through the kitchen and out the back door of the upper level, a bridge travels to an enclosed deck that overlooks the park. The journey does not end at the deck, as stairs lead down to the raised patio and connect to the partially enclosed walkout patio through more floating stair slabs.

Every move taken was a discussion about revealing the potentialities of split-level homes in Brookings, SD and transforming those potentials into a template for retrofitting high performance homes, while using architecture to connect the occupant from the front entry to surrounding nature.

Autumn Schlomer is a 4th-year architecture student at South Dakota State University. She currently resides as a co-president of AIAS SD and is looking forward to graduating in May 2021. Autumn will continue her education at SDSU as she pursues her Master’s in Architecture in the fall of 2021. While her love for studio arts runs alongside her architecture, she’s excited to connect her passions in residential design.