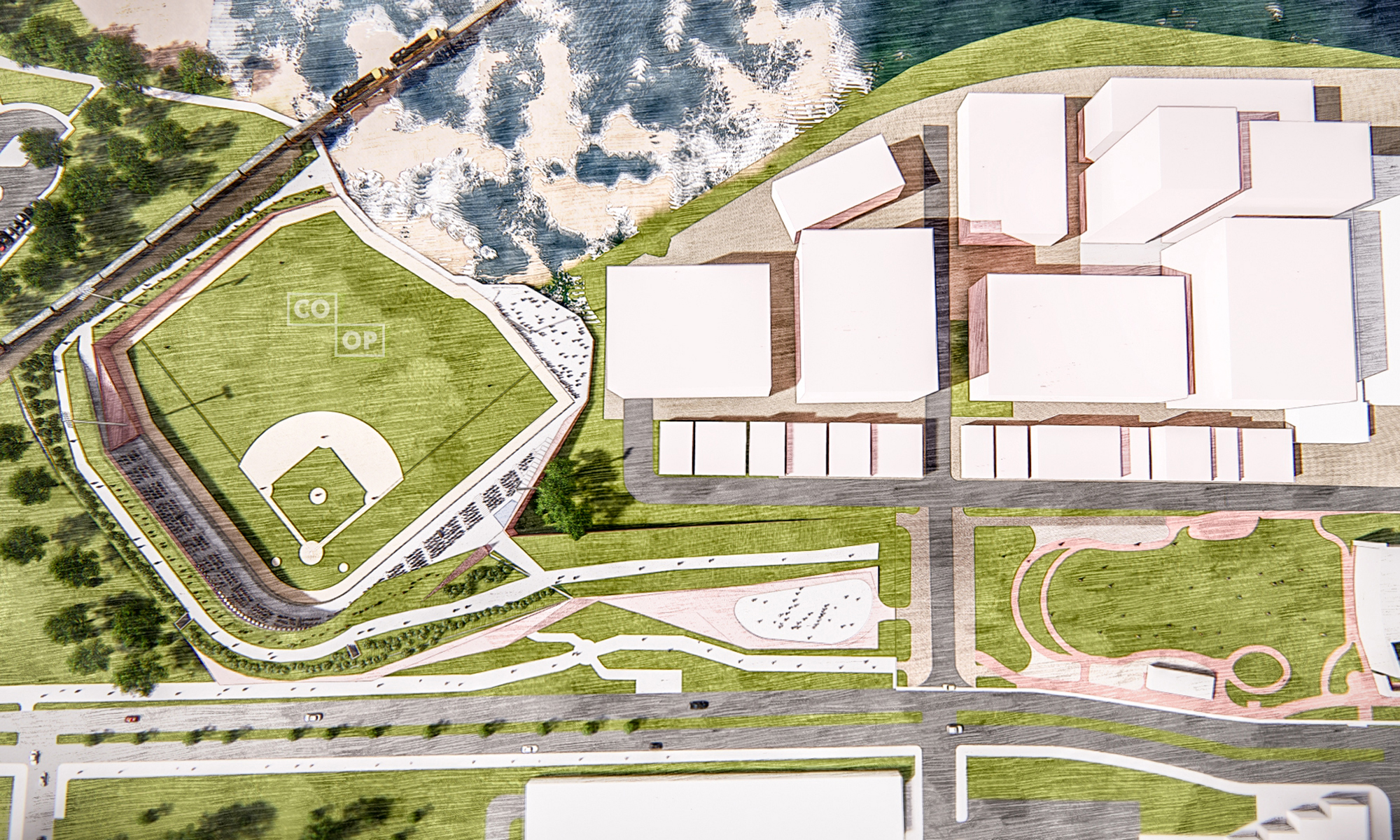 Talking about building a stadium is cheap, so let’s talk.

In the past, deals to build ballparks have been pretty straightforward. The city and team owners worked out a deal to build a stand-alone facility structured with subsidized city dollars along with ticket sales, sponsorships and other stadium revenue. That model is on a losing streak, and we need something different. But we don’t have to be the canary in the coal mine; there are examples that are working.

Cities all over the country are finding that developing hundreds of millions of dollars in construction around a downtown stadium for retail, offices, and residences (Kannapolis, North Carolina is currently developing a $300-million development to coincide with its new downtown baseball stadium in 2020, and Hartford, Connecticut is developing $400 million around its downtown stadium) can create a unique revenue strategy to service the debt.

We need to explore the financial models dozens of cities have recently used to build — or are building — downtown stadiums (i.e. Ft. Wayne, Indiana; Biloxi, Mississippi; Amarillo, Texas; St. Paul, Minnesota; High Point, North Carolina; Hartford, Connecticut; Fayetteville, North Carolina; Kannapolis, North Carolina; Birmingham, Alabama; Winston-Salem, North Carolina) and dozens more cities that are considering downtown stadiums (i.e. Boise, Idaho; Colorado Springs, Colorado; Evansville, Indiana; Pueblo, Colorado; Chattanooga, Tennessee; Lexington, Kentucky, etc.). Although the Canaries must provide leadership and should participate in new stadium expenses, the cost of a new downtown stadium shouldn’t be entirely their own, nor financed on the backs of the average taxpayer, but rather the biggest weight should be in collaboration with developers who stand to gain the most.

The biggest developer project near the Birdcage since the new Event Center is a boarded-up mega pawn shop – now for sale for $12.9 million – and it would take a lot more than trading dad’s old shotgun or unloading grannie’s wedding ring to pay for a new stadium. But that’s the point. Idle parking lots around the Birdcage and Event Center don’t produce much revenue and never will. But the economic spin-off from a downtown stadium can be the catalyst to drive property tax revenue, retail sales, and tourism dollars, not to mention create jobs (Sacramento identifies a 38 percent increase in jobs downtown since its stadium was built). It could take several years for that kind of major development to take off (as some of the aforementioned communities may point out), but if done correctly, it will happen (see downtown Durham, North Carolina). And we know from 65 years of case-study at the Event Center site, it won’t happen there.

Chris Dunlavey, from the facility planning consulting firm of Brailsford & Dunlavey, commented that “downtown sites have a lot of spin-off benefits you don’t find in less developed areas. In the ’70s, there was a trend to go out into the country and build just off the interstate. You’d build an arena and surround it with thousands of surface parking spaces. What they found is that the economic benefits you expect from an arena don’t occur in that setting. They’re more likely to occur in a developed area, where there are restaurants and shops and hotels and parking that make it convenient for people to spend their money.”

There are still big questions as to what to do with the old arena and what would become of the Birdcage if the Canaries fly the coop. You might wonder if we can fit a new baseball stadium downtown. Our firm quickly identified four very different locations for a new stadium in downtown. One location, north of Sioux Steel, could be an amazing bookend to the new Levitt Pavilion with unique upper falls views as a backdrop for baseball. All kinds of synergies are possible, including children’s activities, splash parks, ice skating, winter tubing, outdoor events, shopping and parking areas linked to the Sioux Steel development. This “Ball Park at Falls Park” could grow organically out of the park with an elevated bike path (when games aren’t being played) that would act as canopy and concourse and give beautiful vistas of the upper falls and the ball field. This site would have ideal east-to-west baseball field orientation. Because it’s entirely on city property, the city would have maximum leverage in public-private partnership negotiations. And if a “Phillips Avenue Square” were incorporated into this development, we could draw additional tourists downtown and to the falls (Rapid City estimates 700,000 visitors a year visit their Main Street Square). All of this activity can result in revenue for our community.

The initial challenge to overcome for this site is contaminated soil capped below the grass surface, namely lead-acid battery chemicals and scrap metals. If ever a project might be able to turn a double play, this is it. The ball park might be our best opportunity for the City of Sioux Falls and agencies such as the South Dakota Department of Environment and Natural Resources (DENR) to explore a public-private partnership to clean up after ourselves and remediate toxic soils around the Big Sioux River.

We would need to address parking concerns for a new downtown stadium – though we do know that 15,000 people enter and leave downtown for work every day and thousands more do business downtown – so parking a few thousand people for a ballgame after 5 p.m. could be done. It’s also true that with the challenges surrounding the current downtown public-private parking ramp partnership, we would need to proceed carefully and learn from other communities.

Even if you prefer your baseball at the Birdcage or you refuse to cross east of Marion Road on principle, you might consider supporting a public revenue stream that doesn’t increase your taxes while creating an economic impact that can help pay for your roads, schools and utilities – not to mention driving job growth, recruitment and retention for employers and expanding cultural opportunities. And if you love downtown Sioux Falls and want to see it continue to grow and prosper, this could be a once-in-a-lifetime catalyst.

If we alter the financial formula, a downtown baseball stadium in Sioux Falls is worth talking about.